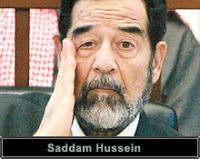 Ba'ath threatens US if Saddam is executed

from international herald tribune: Saddam Hussein's Ba'ath Party threatened Wednesday to retaliate if the ousted Iraqi leader is executed, warning in an Internet posting it would target U.S. interests anywhere... "Our party warns again of the consequences of executing Mr. President and his comrades... The Ba'ath and the resistance are determined to retaliate, with all means and everywhere, to harm America and its interests if it commits this crime," the statement added, referring to Ba'ath fighters as "the resistance."

Israel breaks settlement promise to US
from ap/msnbc: Israel has approved a new settlement in the West Bank to house former Jewish settlers from the Gaza Strip, officials said Tuesday, breaking a promise to the U.S. to halt home construction in the Palestinian territories.

from new york sun: The FBI is missing nearly a quarter of its files relating to investigations of recent leaks of classified information, according to a court filing the bureau made last week. In response to a Freedom of Information Act lawsuit, the FBI said it identified 94 leak investigations since 2001, but that the investigative files in 22 of those cases "are missing" and cannot be located.

China to stay with one-child policy
from ap/cnn: China has no plans to change its one-child policy, Premier Wen Jiabao said, adding family planning was critical to China's modernization plans. The official Xinhua News Agency on Wednesday quoted Wen as saying the "government will adhere to the basic policy of family planning with improved services and stronger leadership."

from reuters/yahoo: A documentary says French special forces had Osama bin Laden in their sights twice about three years ago but their U.S. superiors never ordered them to fire. The French military, however, said that the incidents never happened and the report was "erroneous information."