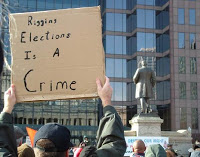 from la times: Two election workers were convicted Wednesday of rigging a recount of the 2004 presidential election to avoid a more thorough review in Ohio's most populous county... Ohio gave President Bush the electoral votes he needed to defeat Democratic Sen. John F. Kerry in the close election and hold on to the White House in 2004.

israel 'may have' violated cluster bomb agreement
from daily kos: As with other promises Israeli governments have made to the U.S., in return for billions of economic and military aid each year, such as promises regarding settlement activity in the occupied west bank and the use of F-16 helicopters Israel has felt free to disregard agreements regarding the use of cluster bombs sold to it by the U.S.

the 'wipe israel off the map' hoax

from paul joseph watson: ...The Guardian's Jonathan Steele cites four different translations, from professors to the BBC to the New York Times and even pro-Israel news outlets, in none of those translations is the word "map" used. The closest translation to what the Iranian President actually said is, "The regime occupying Jerusalem must vanish from the page of time," or a narrow relative thereof. In no version is the word "map" used or a context of mass genocide or hostile military action even hinted at.

from reuters: President George W. Bush's father accused the news media of "personal animosity" toward his son and said he found the criticism so unrelenting he sometimes talked back to his television set.

"It's one thing to have an adversarial ... relationship -- hard-hitting journalism -- it's another when the journalists' rhetoric goes beyond skepticism and goes over the line into overt, unrelenting hostility and personal animosity," former President George Bush said.