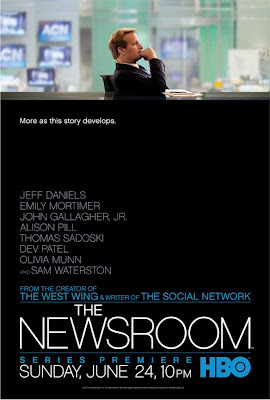 ‘The Newsroom’ Is The Inverse of ‘Network’

from avclub.com: Aaron Sorkin’s new HBO series The Newsroom begins with what many will call a Network moment, when a news anchor, finally unshackled by the chains of bland neutrality, comes out and says what he really thinks. In this case, it’s Will McAvoy (Jeff Daniels), a man so determined not to alienate viewers of any political persuasion that he’s been dubbed “the Jay Leno of news anchors.” When asked during a panel discussion, “What makes America the greatest country in the world?,” Will finally comes to a point when the standard bromides from the left (Diversity!) and the right (Freedom!) are intolerable, and it’s time for everyone to acknowledge that, in fact, we’re a nation in decline. And that we only lead the world in incarcerated citizens. And that the Millennials are the “worst—period—generation—period—ever—period.” And that we once “reached for the stars” and were “informed by great men” and blah blah blah fuckity blah.

But really, this is not a Network moment, but an “Aaron Sorkin moment,” those oft-occurring rants when a hardened cynic is revealed as a bruised idealist. In Network, Peter Finch’s “mad as hell” speech lands him at the center of a three-ring media circus, surrounded by fortune-tellers, gossips, and a rabid studio audience. The Newsroom may pivot on a similar breakdown, but it’s the inverse of Network: Telling the unvarnished truth brings Will to the more dignified and righteous place of being his real self, a modern-day Cronkite or Murrow who can drop the fair-and-balanced pose and “speak truth to stupid” when the occasion warrants it. For Sorkin skeptics, this is very dangerous territory.
Flashback: 'Studio 60 on the Sunset Strip' -
"Are We Being Lobotomized While Art Gets Its Ass Kicked?"

Updates: Thanks to Red Ice Creations!*
The Outsourcing of Local News*
News media corruption and 'Starsuckers'*