Nibiru Asteroids? Has It Begun? Russia, Kazakhstan, Australia and Cuba 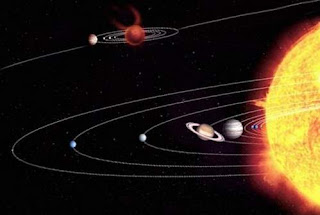 Are recent meteor over Russia and asteroid 2012 DA unrelated and just coincidence? Are meteors over Russia, Kazakhstan, Australia and Cuba unrelated or indication of larger phenomena:  Nibiru or Planet X? "The meteor -- estimated to be about 10 tons -- entered the Earth's atmosphere at a hypersonic speed of at least 54,000 kph and shattered about 30-50 km above the ground, the Russian Academy of Sciences said in a statement," informs Before It's News  (BIN ) on Russian incident.  BIN blog entry further suggests it could be part of bigger phenomena:  "The Zetas predicted that asteroid swarms would be used as an excuse by the establishment to explain the debris in the tail of Planet X. Since Planet X arrived in the inner solar system in 2003, debris in the tail of Planet X has resulted in numerous fireballs. At first, NASA explained this as space junk, but when pieces of the meteor were located, the approach by those effecting the cover-up over the presence of Planet X was to limit the news reporting of fireball activity. Nevertheless, when fireballs screamed across several states or provinces, their presence was hard to deny. In October, 2009 NASA began to claim these fireballs as 'asteroids', or rogue 'near earth objects' instead, claiming they were unaware of the trajectory until the last minute. This was a radical shift in explaining the debris in the tail of Planet X, but a shift that was anticipated by the Zetas in their 2003 prediction." The rational capacity of most human beings will reject remote possibility Nibiru AKA Planet X - a dark star - a captured satellite in highly elliptical orbit, has made a rare intrusion (every 3,600 years?) into inner solar system!  On the other hand, heightened meteor traffic with spectacular displays not just a dim object passing field of vision with aid of binoculars, makes a mind wonder?  The most recent prior post on Nibiru is available here.