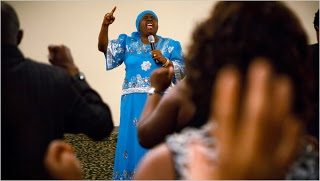 nigerian witch hunter bringing ‘gospel of hate’ to US

from iheu.org: In March, Nigeria's notorious witch hunter, Helen Ukpabio, is organising a “Deliverance Session” in the United States, according to information posted on the web site of the Liberty Gospel Church. The event is slated for March 14-25 at Liberty Gospel Church in Houston, Texas. The program is said to be “12 days of battling with the spirit for freedom.”... Helen Ukpabio is a Christian fundamentalist and a Biblical literalist. She uses her sermons, teachings and prophetic declarations to incite hatred, intolerance and persecution of alleged witches and wizards. Ukpabio claims to be an ex-witch, initiated while she was a member of another local church, the Brotherhood of Cross and Star. She later founded the Liberty Gospel Church to fulfill her 'anointed mission' of delivering people from witchcraft attack. Ukpabio organizes deliverance sessions where she identifies and exorcizes people, mainly children, of witchcraft. Headquartered in Calabar in Southern Nigeria, the Liberty Gospel Church has grown to be a witch hunting church with branches in Nigeria and overseas. Helen Ukpabio’s gospel of hate -- promoted through her publications, films (like the End of the Wicked) and sermons -- fuels witchcraft accusations against children in the region. The witch hunts in Nigeria and other parts of Africa in recent years have resulted in discrimination, violence, torture and death. This was captured in a documentary, Saving Africa's Witch Children which was broadcast in 2008 on Channel 4 in the UK and in 2010 on HBO in the USA