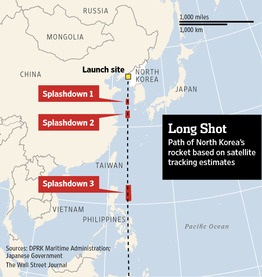 Wall Street Journal (WSJ) reports North Korea successful rocket launch, Wednesday, the country also "...issued a brief statement saying the rocket successfully launched a satellite into space. Other countries saw the launch as a cover for a test of long-range missile technology."  Perseverance pays off as WSJ summarizes previous efforts: "North Korea has attempted four such launches previously. Each failed to reach space but it claimed success in three of the attempts. In its last attempt, in April, North Korea's rocket crashed 80 seconds after takeoff into the Yellow Sea west of South Korea." The present launch occurred reportedly, "...shortly before 10 a.m. local time, flew south over the Yellow Sea, East China Sea and the Philippines, according to Japanese military authorities who tracked it closely..." Success may bring more urgency to direct military focus on North Korea, one of two surviving points in  George W. Bush's  "Axis of Evil."  Does North Korea demonstrating adequate delivery system for its nuclear weapons and likelihood of increased trade in its missile tech only serve to bring country closer to war?  What more of an excuse would US military require as grounds for another war?