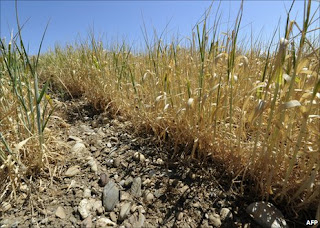 from bbc: Farmers in northern Europe are finding themselves caught between a hard place and a rock-hard place as an unusually dry spring turns to summer. France, the EU's top wheat producer, has formed a national "drought committee", limiting water consumption in many regions and lifting curbs on the use of fallow land for grazing. The European Commission has just approved in principle France's request for an advance on the Common Agricultural Policy (CAP) payments its farmers are due to receive in December, bringing them forward to 16 October. With parts of Europe seeing less than 40% of their long-term average rainfall between February and April, fellow EU states may follow suit. A bad year for wheat - second only to wine as the EU's largest agricultural product - would hurt not only the farmer, but could well hit the consumer, driving up the cost of Europeans' pasta and pretzels. "You see the root, how it's dry, how short it is?" asked rapeseed grower Pascal Seingier this week, speaking to a Reuters TV crew that came to see him on his farm near Lumigny in northern France. "There is nothing. And the whole top of the field is like that. Fortunately that's not the case lower down. But where the earth is very shallow, where there are no water reserves, well - there you go."