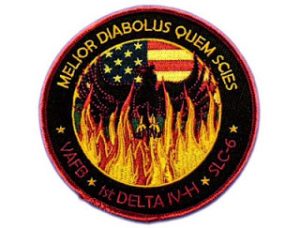 The Delta IV heavy NROL-49 rocket launched recently from Vandenberg AFB. The spectacular launch provided by United Launch Alliance (ULA), a group of well-known defense contractors, can be viewed here. Dwayne Day writes in a Space Review article, “Better the devil you know…,” what the patch pictured opposite hints about the classified top secret satellite launch. The fourteen stars are the number of successful launches of the KH-11 series of reconnaissance satellite. The KH-11 type, which dates back to 1976, was to be replaced by a new series. The new satellite ran into problems and the program canceled. The National Reconnaissance Office, which builds US spy satellites, went back and built one more KH-11 out of spare parts. The last venerable launch of the series is symbolized by the phoenix rising from the flames of the canceled series. The Latin inscription reveals the familiar past, “melior diabolus quem scies,” translates “the devil you know”. Day and Roger Guillemette began writing about secret space mission patches in early 2008 and perhaps their best article, “Space Age hieroglyphs,” is a treatment of the STS-38 mission.