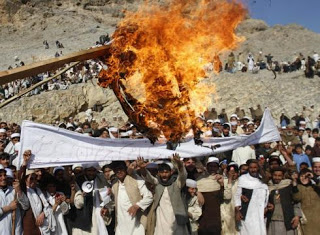 Obama apologizes for Quran burning as Afghan protests go on

from mcclatchy: President Barack Obama apologized Thursday for the accidental burning of Qurans by U.S. forces in Afghanistan as anti-American demonstrations raged for a third consecutive day, leaving two NATO troops and at least five Afghans dead and 26 Afghans wounded nationwide. At one such demonstration outside a U.S. base in Khogyani, in the eastern province of Nangarhar, a protester who was wearing an Afghan army uniform opened fire, killing the two soldiers with the U.S.-led NATO coalition, officials said. Adding to a chorus of profuse apologies from U.S. officials over the burning incident, Obama wrote a three-page letter to Afghan President Hamid Karzai on bilateral relations that included "an expression of his regret and apologies for the inappropriate and inadvertent mishandling of religious materials," White House spokesman Jay Carney said.