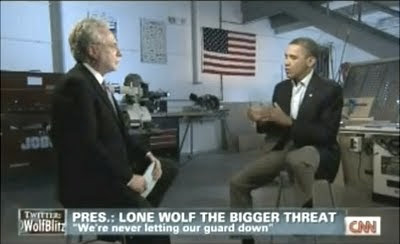 from cbsnews: With the tenth anniversary of the September 11 approaching, memories of the attacks on that day are surfacing as well as concerns about an attack on that day next month. In an interview with CNN, President Obama said that he was more worried about a deranged individual perpetrating an attack on 9/11 in retribution for killing Osama Bin Laden than a large scale, coordinated Al Qaeda attack. "As President of the United States I worry about all of it, but the most likely scenario ends up being a lone wolf operations rather than a large well coordinated attack," he told CNN's Wolf Blitzer. He gave the example of the massacre by Anders Behring Breivik in Norway as an example of the lone wolf. "One person deranged or driven by hateful ideology can do a lot more damage... We are vigilant and constantly monitoring the potential risks of terrorist attacks... We are not letting our guard down." A joint FBI/Department of Homeland Security memo (PDF) echoes Mr. Obama's statements: "Small-arms operations could be employed through a range of tactics from a lone offender--as illustrated by the recent 22 July 2011 lone shooter attack that took place in Norway--to a coordinated small-unit attack involving several operatives. Recent lone offender attacks and plots in the United States and abroad illustrate the effectiveness of the small-arms tactic and the need for continued vigilance and awareness of this tactic. Attacks by lone offenders--which by definition lack co-conspirators, and therefore provide fewer opportunities for detection--may be more difficult for law enforcement and homeland security authorities to disrupt."