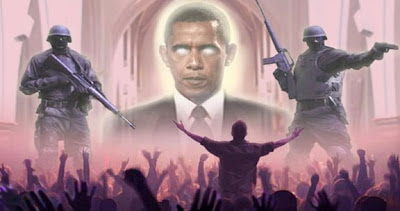 The Velvet Glove of Martial Law?*

from washingtonsblog.com: President Obama signed an Executive Order for “National Defense” yesterday that claims executive authority to seize all US resources and persons, including during peacetime, for self-declared “national defense.” The EO claims power to place any American into military or “allocated” labor use (analysis here and here). “American exceptionalism” is the belief that a 200+ year-old parchment in the National Archives has magical powers to somehow guarantee limited government from 1% tyranny, despite the specific and clear warnings of the US Founders, despite world history of repeated oligarchic/1% tyranny claiming to be for the “good of the people,” and despite US history’s descent into vicious psychopathy (short version here: US war history in 2 minutes) hidden in plain view with paper-thin corporate media propaganda.