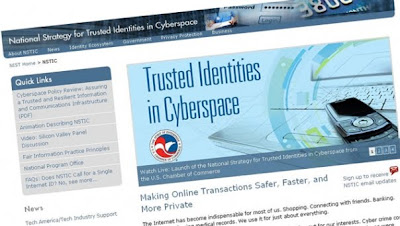 from cnet: The Obama administration said today that it's moving ahead with a plan for broad adoption of Internet IDs despite concerns about identity centralization, and hopes to fund pilot projects next year.

At an event hosted by the U.S. Chamber of Commerce in Washington, D.C., administration officials downplayed privacy and civil liberties concerns about their proposal, which they said would be led by the private sector and not be required for Americans who use the Internet.

A 55-page document (PDF) released by the White House today adds a few more details to the proposal, which still remains mostly hazy and inchoate.

It offers examples of what the White House views as an "identity ecosystem," including obtaining a digital ID from an Internet service provider that could be used to view your personal health information, or obtaining an ID linked to your cell phone that would let you log into IRS.gov to view payments and file taxes. The idea is to have multiple identity providers that are part of the same system.

Administration officials plan to convene a series of workshops between June and September of this year that would bring together companies and advocacy groups and move closer to an actual specification for what's being called the National Strategy for Trusted Identities in Cyberspace, or NSTIC.

Left unsaid was that the series of workshops, which will be open to the public, will give the proposal's backers a chance to downplay concerns that it could become the virtual equivalent of a national ID card.

During his speech, Locke lashed out at the "conspiracy theory set" who have criticized the proposal. A column in NetworkWorld.com, for instance, called NSTIC a "great example of rampant, over-reaching, ignorant, and ill-conceived political foolishness."