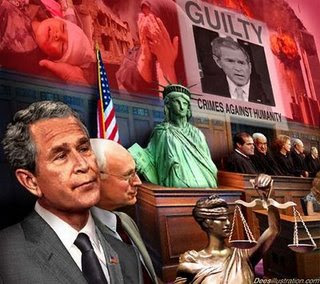 from dpa: US Attorney General Eric Holder is considering whether to probe allegations of the use of brutal torture by the Central Intelligence Agency (CIA), according to a media report published Sunday. Holder is to decide whether he will appoint a prosecutor to look into the nature of the torture of terrorist suspects since the September 11 terrorists attacks on the US, the Washington Post reported. Pushing ahead with a criminal investigation would bring Holder into conflict with President Barack Obama. Obama has appeared reluctant to probe the alleged use of torture and brutal interrogation methods by the government of his predecessor, George W Bush.

cia's history of lying to congress
from lisa pease: On TV this week, with a measure of disbelief in their voices, the pundits ask, did the CIA lie to or deliberately mislead Congress? How is that not a rhetorical question? The Agency has a long history of manipulating Congress and others to support its programs. That this was posed as an actual question reveals the media’s historical illiteracy in this matter.

updates from 7/15:
origins of the cia’s assassination program:
who proposed it, what its code name was*

yes, the US did carry out foreign assassinations*
jeremy scahill on the dems' selective amnesia on assassination:
clinton did it & obama does it, too*
new reports of massive spying, criminality by US government*
cia didn't tell congress about program to kill al-qaeda leaders*
cia assassination program revealed: nothing new under the sun*
'unit was so secret that even the former cia director george tenet did not control its activities'*
cia contemplated human hit squads, turned to killer drones*
the secret program can't be foreign assassinations, because congress was briefed on that in '01 & nytimes wrote about it in '02*
cia assassin program was nearing new phase*
video: ex-cia agent suggests cia & military assassins cooperated*