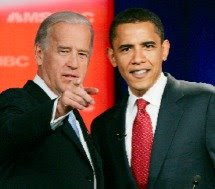 obama/biden ’08: and the crowd goes… meh

from thinkprogress: CNN’s John King is reporting that Sen. Barack Obama (D-IL) has selected Sen. Joseph Biden (D-DE) as his running mate. King said the Obama campaign will officially reveal the selection in a text message to over three million people soon. Obama is scheduled to appear with Biden at a rally this afternoon in Springfield, IL.

Biden, who ran as a presidential candidate in 1987 and 2007, has served in the Senate since 1972 and is currently the Chairman of the Foreign Relations Committee. Last week, New York Times conservative columnist David Brooks urged the selection of Biden, writing that he “provides what Obama needs.” Newsweek’s Jonathan Alter wrote, “The main task now for Obama is reassurance that he could handle the job, especially commander in chief. Biden provides it.”

"John McCain remains wedded to the Bush Administration’s myopic view of a world defined by terrorism… He would continue to allow a tiny minority to set the agenda for the overwhelming majority. It is time for a total change in Washington’s world view."

obama announces biden as running mate via text message
from wikinews: Senator Barack Obama from Illinois, the presumptive nominee of the Democratic Party, announced his choice for Vice President as Joe Biden. The announcement came via text message early Saturday morning, to people who had signed up to receive the announcement on the official Barack Obama campaign website. Friday afternoon, several campaign officials had informed the media that the text message announcement would be distributed Saturday morning. Reportedly, the announcement would come a few hours ahead of a scheduled rally at the Old State Capitol State Historic Site in Springfield, Illinois, where Obama and and whoever the VP candidate would be would appear together for the first time as the Democratic ticket. On August 19th, Biden while leaving his house reportedly said to some reporters, "hey guys, I'm not the guy."

obama leaves texters at altar, runs off w/ dinosaur press
from threat level: The best line in the coverage of Barack Obama's choice of Sen. Joe Biden as running mate is this nugget from the AP story.

"The official who spoke did so on condition of anonymity, preferring not to pre-empt a text-message announcement the Obama campaign promised for Saturday morning," the AP wrote.

If the official didn't want to pre-empt the much-anticipated text message announcement, shouldn't it have been Biden's name that was kept secret?

At the DailyKos, Marcos Moulitsas was fairly gloating Friday night - before the Biden story broke - that the planned direct-to-supporters announcement was proof "that old media is getting left out in the cold." And Twitter was buzzing with anticipation - Obama fans described their hearts jumping into their throats every time their phones buzzed, thinking it might be the Text Message From On High. Now you have to feel sorry for them. They're still waiting, while the old-timers watching the boob-tube have the scoop.

After all the talk about how the Obama campaign was blazing a bold new trail in filterless netroots communication, in the end, it behaved just like any other political campaign and went to CNN, AP, Fox News, ABC, NBC and CBS with its news. It turns out the revolution will be televised, it just won't be a revolution.

secret service on their way to biden's house
from abcnews: The United States Secret Service has dispatched a protective detail to assume the immediate protection of Sen. Joseph Biden, D-Del., a source tells ABC News, indicating in all likelihood that Biden has been officially notified that Sen. Barack Obama, D-Illinois, has selected him to be his running mate.

obama's & mccain's vp picks won't matter in november
from usnews: While vice-presidential mania hits its peak, can we take a deep breath and remember something: In November, it won't matter whom Barack Obama and John McCain select. Remember two names: Lyndon B. Johnson and J. Danforth Quayle.

obama selects biden to reassure the US ruling elite
from global research: The selection of Senator Joseph Biden as the vice-presidential candidate of the Democratic Party underscores the fraudulent character of the Democratic primary campaign and the undemocratic character of the entire two-party electoral system. Democratic presidential candidate Barack Obama, the supposed protagonist of “change,” has picked as his running-mate a fixture of the Washington establishment, a six-term US senator who is a proven defender of American imperialism and the interests of big business. The rollout of the Biden selection over three days of escalating media attention, culminating in the text-message announcement early Saturday and a kickoff rally in Springfield, Illinois, is a metaphor for the entire Obama campaign. His presidential candidacy represents not an insurgency from below, but an effort to manipulate mass sentiments, using Internet technology and slick marketing techniques, aided by a compliant media, to produce a political result that is utterly conventional and in keeping with the requirements of the US ruling elite.

a few questions for joe biden that should be answered, preferably under oath
from 9/11 blogger: The following question was submitted to the 9/11 Commission by the 9/11 Family Steering Committee.

Why did Mahmood Ahmed, Director of Pakistan's secret service, the (ISI) order Saeed Sheikh to wire $100,000 to hijacker Mohamed Atta?

What was Mahmood Ahmed's relationship with Al Qaeda?

Where did the money come from?

Did officials in Pakistan know in advance about the terrorist attack?

On September 11 th , Mahmood Ahmed had a breakfast meeting in Washington, D.C., with House and Senate Intelligence Committee chairmen, Rep. Porter Goss and Senator Bob Graham. What were they discussing?

The 9/11 Commission also presumably heard about Lt. Gen. Ahmed from FBI Whistle-blower Sibel Edmonds during her 3 1/2 hours of testimony. At the insistence of the families. They may have also heard of Lt. Gen. Ahmed during a meeting with the Pakistani ISI. The 9/11 Commission did not answer the families' question, and did not mention Lt. General Mahmood Ahmed in their report even though they were mandated to give a "full and complete accounting" of the 9/11 attacks.

Why did you meet with an alleged paymaster of 9/11, and alleged participant in the nuclear black market after the 9/11 attacks?

biden on 9/10: the ‘real threat’ may come in ‘the belly of a plane’
from thinkprogress: Before 9/11, the Bush administration’s national security focus was on missile defense, not terrorism. In fact, on 9/11, then-National Security Adviser Condoleezza Rice was set to deliver a speech that focused “largely on missile defense.” Writing at the Huffington Post, Joe Cirincione — president of the Ploughshares Fund — recalls this quote from Sen. Joseph Biden (D-DE) on Sept. 10, 2001, warning against the Bush administration’s approach:

We will have diverted all that money to address the least likely threat while the real threats come into this country in the hold of a ship, or the belly of a plane, or are smuggled into a city in the middle of the night in a vial in a backpack.

Cirincione writes, “If George Bush had listened to Joe Biden instead of Donald Rumsfeld, the history of the past seven years would have been very different. We might have prevented 9/11.”