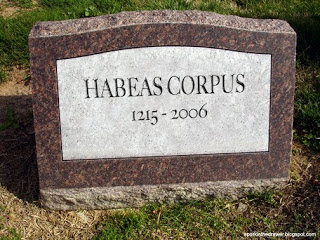 obama/bush retains right to detain people with no habeas review

from nytimes: A federal appeals court ruled Friday that three men who had been detained by the United States military for years without trial in Afghanistan had no recourse to American courts. The decision was a broad victory for the Obama administration in its efforts to hold terrorism suspects overseas for indefinite periods without judicial oversight.

The detainees, two Yemenis and a Tunisian who say they were captured outside Afghanistan, contend that they are not terrorists and are being mistakenly imprisoned at the American military prison at Bagram Air Base.

But a three-judge panel of the United States Court of Appeals for the District of Columbia ruled unanimously that the three had no right to habeas corpus hearings, in which judges would review evidence against them and could order their release. The court reasoned that Bagram was on the sovereign territory of another government and emphasized the “pragmatic obstacles” of giving hearings to detainees “in an active theater of war.”

The ruling dealt a severe blow to wider efforts by lawyers to extend a landmark 2008 Supreme Court ruling granting habeas corpus rights to prisoners at Guantánamo Bay, Cuba. A lower court judge had previously ruled that the three Bagram detainees were entitled to the same rights, although he had found that others captured in Afghanistan and held there were not.

A lawyer for the detainees, Tina Foster, said that if the precedent stood, Mr. Obama and future presidents would have a free hand to “kidnap people from other parts of the world and lock them away for the rest of their lives” without having to prove in court that their suspicions about such prisoners were accurate.