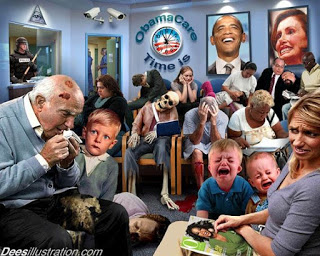 from latimes.com: The Supreme Court's conservative justices said Wednesday they are prepared to strike down President Obama’s healthcare law entirely. Picking up where they left off Tuesday, the conservatives said they thought a decision striking down the law's controversial individual mandate to purchase health insurance means the whole statute should fall with it.

The court’s conservatives sounded as though they had determined for themselves that the 2,700-page measure must be declared unconstitutional. "One way or another, Congress will have to revisit it in toto," said Justice Antonin Scalia. Agreeing, Justice Anthony Kennedy said it would be an "extreme proposition" to allow the various insurance regulations to stand after the mandate was struck down.

Meanwhile, the court's liberal justices argued for restraint. Justice Ruth Bader Ginsburg said the court should do a "salvage job," not undertake a “wrecking operation." But she looked to be out-voted. Chief Justice John G. Roberts Jr. and Justice Samuel A. Alito Jr. said they shared the view of Scalia and Kennedy that the law should stand or fall in total. Along with Justice Clarence Thomas, they would have a majority to strike down the entire statute as unconstitutional.