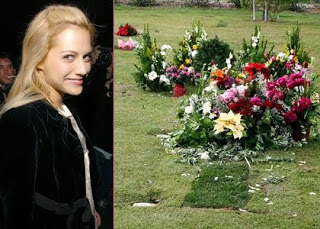 Actress Brittany Murphy, 32, passed away  Dec. 20. 2009 of cardiac arrest in shower of her husband Simon Monjack's Los Angeles home.  In an additional tragedy, Monjack, 40,  died just five months later in his house from same diagnosis of pneumonia and cardiac arrest.  The present writer would like to see actuarial odds of such a "coincidence," which casts suspicion on each of these deaths.  More recently,  Brittany's father secured an outside lab for testing, and now, there are suspicions of poisoning. Illuminati Watcher recaps facts of double tragedy:

"Something has always seemed a bit odd about Brittany Murphy’s death. She was 32 years old and dropped dead at her house due to 'pneumonia' and 'drug interactions.' This in itself is odd, but couple that with the fact that her husband, Simon Monjack (age 40) died five months later in the house, with 'pneumonia,' just like Brittany. Now ask yourself what the odds of that happening are; two young adults die within months of each other from the same thing. Monjack’s death was initially called 'natural causes,' even though he was only 40 years old. Monjack was also on record discussing a secret Hollywood group (Illuminati) that was out to destroy Brittany’s career."

Vigilant Citizen (VC) recognizes all too familiar pattern where young stars are built up, torn down and then disposed of in some kind of sick public ritual:

"Brittany Murphy followed the same pattern...Strangely enough, there often appears to be a media buildup around these figures before their death documenting their odd behaviour or personal problems. Were these deaths premeditated and part of some kind of sick ritual carried on by the occult-minded elite at the helms of the industry? Are charismatic stars being risen to fame in order to later sacrifice them, creating a worldwide mega-ritual? Is the wave of shock and grief surrounding these events harnessed in some way by high-powered occultists? These concepts might sound totally ridiculous to the average person but, to occult initiates, the magical potency of a human sacrifices has been recognized and documented by the rituals of many ancient civilizations..."

VC sees evident signs of MK Sex Kitten Beta programming. The possibility arises then, Monjack was her handler, and also, disposed of to erase any incriminating clues two may have known about Hollywood Satanic elite. Murphy may have simply been no longer in her prime and discarded as any object that's outlived its usefulness?   Does a used model than become a prime candidate for sacrifice?    Murphy died close to the winter solstice, video below makes case for a solstice sacrifice!