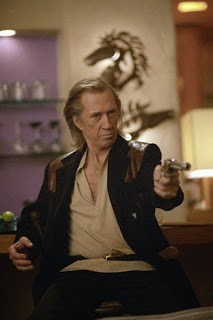 David Carradine died in 2009, while making a film in Thailand, facts we can ascertain. A second look into Carradine’s death makes everything else less certain. A picture in a Thailand tabloid makes it nearly impossible that Carradine died while engaging in an act of autoerotic asphyxiation, tabloid photo clearly reveal both hands bound above his head – a feat Houdini couldn’t manage! Loren Coleman decodes occult signatures behind Carradine’s demise in blog entry at the time:

“Did someone Kill Bill, after all? The symbolic imagery was all around him, as seen in the background.

An elementary decoding of the Carradine family’s history and ties to certain groups makes David Carradine’s death more mysterious than most.

Dr. Michael Baden, the former New York City chief medical examiner and lead investigator of the House Select Committee’s review of the JFK assassination, has determined that Carradine’s did not die by suicide.

Coleman cites numerous symbolic references to other movies even to Bruce Lee’s death in the Kill Bill movies. Was Carradine’s fate scripted years ago?

“In Craig Heimbichner’s Blood on the Altar: The Secret History of the World’s Most Dangerous Secret Society, it notes that the cofounder of the Jet Propulsion Laboratory Jack Parsons was the OTO’s Agape Lodge cofounder. The OTO, he characterizes, as a group involved in sex-magick, pedopilia, and other tales of power and perversion. (BTW, agape is Greek for “brotherly love.”)

Heimbichner observes (p. 121), ‘His Agape Lodge was affiliated with many Hollywood writers and actors, including John Carradine, father of [David] the star of ‘Kung Fu’ and the cinematic blood-geyser Kill Bill. The elder Carradine read one of [Aleister] Crowley’s poems at the inauguration of the Agape Lodge No. 2 in 1935.’

Coleman airs in rhetorical fashion ruminations on what might be going on in the Carradine family:

So, was the father to the clan a dedicated OTO member in the 1930s, or in stereotypical Hollywood fashion, merely getting closer to his topic, as Heath Ledger would do recently with the Joker role, to more deeply understand the forbidden subject matter being researched? Was David Carradine doing something similar in Bangkok and elsewhere?

The elder Carradine, we now know, worked with those who were trying to understand the modern versions of the Illuminati. John Carradine is listed as the narrator for Gary Allen’s cassette recording of the tape, ‘The Establishment – C. F. R.’ It is noted as an ‘in-depth look at the ‘invisible government’ that controls the United States. C.F.R. as a modern manifestation of the conspiracy begun by the Illuminati.’ (“C.F.R.” stands for the Council on Foreign Relations).”

The questions implied, “are the Carradines, merely actors researching roles, occultists, government agents or a mixture?” The present writer leans towards the latter. Coleman considers next mystical toponomy as he puts it, a “… marriage between action in time [or recorded history] and physical locations on the earth regarded as ‘places of power’…” At least one symbol stands out in phallic fashion, Coleman describes location where Carradine died below:

“One aspect of this story that seems to have been under-investigated is where David Carradine died. What of the specifics of this site?…David Carradine appears to have very carefully picked this spot, or had someone pick it for him. A 5-star luxury hotel in Bangkok, Swissotel Nai Lert Park offers a unique city retreat in Thailand’s bustling capital…The hotel’s location is key. One of Bangkok’s most unique animist shrines resides under the large banyan tree…Here, favors are asked of Tubtim, a water spirit that lives in the adjacent canal. If a wish is granted, devotees leave phallic offerings of all shapes and sizes. Hundreds of colorful examples are lined up around the shrine…Literally hundreds of penises (phalluses) – from small wooden carvings to big stone sculptures that stand ten feet tall and decorated with ribbons – make this shrine quite unique..”

Carradine passed away in a Bangkok hotel with “…ropes tied around David’s neck and around his genitalia and that they were tied together. And that there is a report — several reports that there were ropes tied around his wrists.” Is there an occult signature incorporating mystical toponomy? We’ll likely never know full story behind the Carradine death, but readers can rest assured it wasn’t a self-inflicted accidental death. Occult Death Series: Whitney Houston.