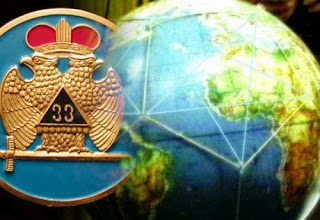 A 2006 World Mysteries article via Red Ice Creations takes reader on a mystical mystery tour of the 33rd parallel. The occult significance of the 33rd north latitude cannot be overestimated! Writer Gary David guides tour from Phoenix, AZ to Phoenicia and Babylon in the Middle East to Far East China and then back to the New World. David begins with a nice summary of the numerological significance of 33 and its close association with isosceles right triangle:

"The number 33 enigmatically stretches as a latitude line across many diverse cultures in many different times. Known in numerology as the Master Teacher, 33 is the most influential of all numbers, indicating selfless devotion to the spiritual progress of humankind. The other two master numbers, 11 (vision) and 22 (vision with action) form the base of a two-dimensional pyramid, and added together equal 33 (guidance to the world), the apex of the pyramid."

"The first stop on our tour along the 33rd parallel is the metropolis of Phoenix, Arizona, located at 33 degrees 30 minutes latitude...Few casual tourists realize, however, that this was once the center of the ancient Hohokam culture...The largest Hohokam site known as Snaketown was located about five miles north of the exact 33 degrees line, while the ruins of the astronomical observatory called Casa Grande still rest about five miles south of the line. The Hohokam inhabited the Valley of the Sun perhaps as early as 300 B.C. (about the time of Alexander the Great and the Ptolemaic Dynasties in Egypt) and built one of the world’s most extensive irrigation systems. These ancient American Indians created an estimated total of 500 miles of canals to irrigate over 25,000 acres in the Phoenix Basin-- all constructed with mere digging sticks, stone implements, and woven carrying baskets. In fact, no wheelbarrows or draft animals were ever used. The main canals leading from the Salt and Gila rivers measured up to 75 feet across at the top and 50 feet wide at the bottom...Clearly this monumental technology was the key factor that allowed the desert dwelling people to inhabit their extremely harsh region for well over a thousand years."

Mystical "33" mysteries span globe next stop - ancient Phoenicia - coveted in occult as place where much of man's knowledge was bestowed upon him, also, a locus of the mystery religions:

"Skipping across the Atlantic on the same parallel, we find a number of intriguing sites in the Old World. For instance, at a latitude of 33 degrees 19 minutes was located the primary Phoenician seaport of Tyre (now called Sûr), almost 50 miles south of Beirut. Dating back as early as 5000 B.C., Tyre was renowned for a purple-red dye obtained from the snails of the genus Murex. The color is one of the meanings of the word 'phoenix,' which the ancient Egyptians sometimes associated with the purple heron.

On our next stop, we arrive at Baghdad, once, the heart of Babylon:

"A little over 500 miles east of these Phoenician cities at 33 degrees 20 minutes is modern-day Bagdad in Iraq, with Babylon located about 55 miles to the south. This ancient capital of Mesopotamia on the banks of the Euphrates River was once the largest city in the world, encompassing over 2,500 acres. The construction of Babylon began during the twenty-third century B.C. and included the Temple of Marduk (known as Esagila) as well as the legendary Tower of Babel (identified as Etemenanki). The latter structure was a seven-tiered ziggurat rising to a height of 300 feet with a base on each side measuring the same distance. This measurement, incidentally, equals the length of the Hohokam platform mound at Pueblo Grande in Phoenix, Arizona. On the eastern side of Babylon was an outer rampart of triple wall construction extending for 11 miles. A network of irrigation canals reminiscent of the Hohokam also once served the city."

"Traveling along the 33rd parallel from the Middle East to the Far East, we encounter the fabulous White Pyramid located about 60 miles southwest of X’ian (Sian or Hsian) in the Qin Ling Shan Mountains of China’s Shensi Province. This city was made famous for the nearby discovery of the Terra Cota Warriors. Resting at almost the same latitude as Phoenix’s 33½ degrees, this massive stepped pyramid constructed of clay is estimated to be 1,000 feet high and 1500 feet at the base! The current politics of the country have thus far prevented any detailed study of the structure, but it is thought to be 4,500-5,000 year old-- the approximate age of the pyramids at Giza. The White Pyramid was built supposedly after the old emperors, known as “the sons of heaven,” descended to Earth in their “fiery metallic dragons” and began to rule China. Its interior is rumored to be a model of this empire with a jeweled roof depicting the constellations and rivers of flowing mercury. The region also contains up to one hundred more pyramids."

These are highlighted locations with more discussed in original article such as Cahokia pyramid in southern Illinois.