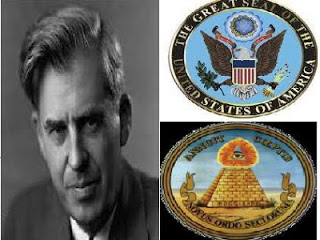 Director Oliver Stone and Prof. Peter Kuznick, creators of series, "The Untold History of the United States," reserve special admiration for Franklin D. Roosevelt's Vice President, Henry A. Wallace (picture).  Stone and Kuznick hold Wallace in high regard due to his opposition to Wall St. and support of labor unions, revealed during a discussion covered in a previous post.  The series submits for viewer's consideration; if Wallace were still Vice President at time of Roosevelt's passing, use of the A-Bomb may have been avoided.   True, Wallace seems forgotten as Stone and Kuznick mention, but there's more in man's background than revealed by series.  It's time to get better acquainted with a truly pivotal occult figure!  Terry Melanson summarizes, in 2001 article, "The All-Seeing Eye, The President, The Secretary and The Guru," how much occult influence Roosevelt and Wallace had on the United States:

"In 1934, Secretary of Agriculture, soon-to-be Vice-President (1940-44) and 32nd degree freemason Henry Wallace submitted a proposal to the president to mint a coin depicting the seal's obverse and reverse. President Franklin D Roosevelt, also a 32nd degree freemason, liked the idea but opted to instead place it on the dollar bill. According to Henry Wallace, in a letter dated February 6, 1951, 'the Latin phrase Novus Ordo Seclorum impressed me as meaning the "New Deal" of the Ages'.”

Wallace guru, Nicholas Roerich receives much of the credit, in occult circles, for placing Great Seal of the United States (picture) in everyone's hands as writer Melanson makes clear:

"...occultists regard Roerich as the guiding hand behind the placement of America's Great Seal and the All-Seeing Eye, and matter-of-factly state that it was at Roerich's insistence that Wallace approach Roosevelt about finally printing the All-Seeing Eye on the dollar bill...both Wallace and
Roerich were members of the Theosophical Society, this is how
Wallace met his Master."

"These three 'wise men' – by placing the reverse of the Great Seal on the dollar bill – succeeded in announcing to the world that America is on 'the path', and is the world's best hope for the spiritual (occult) evolution of the planet. Considering how deep into the occult both Roosevelt and Wallace were already – and Wallace's connections to Theosophy – they had to of known that the most esteemed Theosophist of her time, Alice Bailey, had already declared that the Aquarian Age had begun in 1932. The whole symbology of the reverse is meant to be a mandala announcing this 'New Age of Horus.' They could not help but see the significance of this. And giving that their fellow illuminists in the Federal Reserve had now taken control of America's currency, it was a shoo-in."