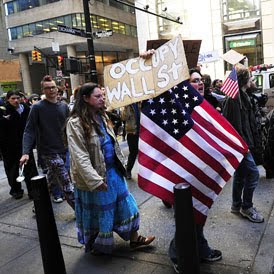 from channel4: The #OccupyWallStreet campaign said police confined a small number of protesters before spraying them with mace. Clips of the alleged incident have appeared across social media – however, Channel 4 News cannot verify the footage independently. The New York Police Department has so far not responded to a Channel 4 News request for its response to the allegations. Protesters say they want to show their anger at, among other things, corporate greed and social inequality. So far, it is reported more than 100 people have been arrested... Police tactics have been compared to those used during the 2004 Republican convention when the NYPD made sweeping arrests of several hundred demonstrators before dropping charges against almost all of them... The alleged mace incident is the latest clash between campaigners and police since the occupation began on 17 September. Over the past few days, police barricades have prevented protesters from reaching the United Nations where the general assembly has been meeting.