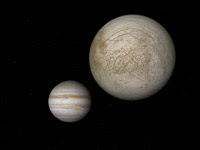 Europa, a Galilean moon of Jupiter, whose subsurface ocean is estimated at 62 miles deep, maybe deepest in our solar system, according to The Daily Galaxy?  "The deepest ocean on Earth is the Pacific Ocean's Marianas Trench, which reaches a depth of 6.8 miles awesomely trumped by the depth of the ocean on the Jupiter's moon, Europa, which some measurements put at 62 miles. Although Europa is covered in a thick crust of scarred and cross-hatched ice, measurements made by NASA's Galileo spacecraft and other probes strongly suggest that a liquid ocean lies beneath that surface. The interior is warmed, researchers believe, by the tidal stresses exerted on Europa by Jupiter and several other large moons, as well as by radioactivity." The prospects for life on Europa seem promising!