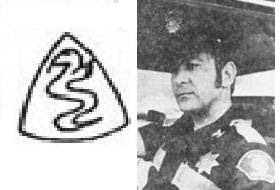 Sgt. Herbert Schirmer, a 22 year old Ashland, NE policeman, reports a UFO sighting in the wee hours of December 3, 1967. Schirmer notices 25 minutes of lost time. The Herbert Schirmer abduction is considered alongside the Lonnie Zamora case of Soccoro, New Mexico in 1964 as major UFO encounters. It's reasoned law enforcement accounts lend crediblility to reports. The informal University of Colorado Condon Committee investigating UFOs, at the time, and to issue the Condon Report in 1968, asked Schirmer to come to Boulder, CO.

In "Badge of the Winged Serpent: The Herbert Schirmer Abduction, an article at Phantoms & Monsters, includes a reprint of a 1976 Vancouver Province article, "UNIDENTIFIED FLYING OBJECT - The Herbert Schirmer Case," where it's reported, "...shortly after his UFO experience, Herb Schirmer was interviewed by members of the Condon Committee, a research project at the University of Colorado funded by the U.S. Air Force. Among those who spoke with Schirmer was Dr. R. Leo Sprinkle,[a University of Wyoming psychologist]."

Sprinkle's hypnosis session, in another ariticle at UFO Casebook, results in Schirmer, "...able to recall even more details about the encounter. The beings were friendly, they drew energy from electrical power lines, and they had a base on Venus." Badge of the winged serpent is the emblem (pictured) the aliens, slightly reptoid in appearance, wore on their left breast as drawn by Schirmer in 1974. Schirmer's story can be heard on You Tube. Dr Leo Sprinkle, an early alien abduction investigator, can be heard in a 2009 interview here.

The young Ashland policeman suffered as a result of his experience, although promoted to Police Chief after the event he resigned in just months unable to focus on his job. "According to Schirmer, he was ridiculed by some of the townspeople, his car was dynamited, and his wife left him." Schirmer suffered headaches, a buzzing in his head and felt ill immediately after the encounter, suggestive of mental trauma and similar to the symptoms reported by Betty and Barney HIll in their 1961 abduction. Schirmer believes he was subjected to a trance, perhaps, due to a silver object placed by his neck where a red welt appeared later.

Two books by Eric Norman, "Gods, Demons, and Space Chariots," and "Gods and Devils from Outer Space," covered the abduction. There are even artistic creations inspired by the case, David Sankey created: "The Watchman," "Sister Ship" and "Serpent Insignia". Experts impressed by the 22 year old man without education, who seemed to describe things well beyond his experience, the winged serpent and its reptoid implications a part of the mystery.