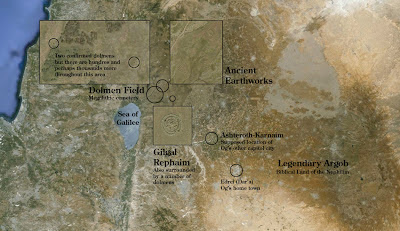 King Og of Bashan, a legendary king of last surviving remnant of Rephaim (giants), remains a mystery.  Was he a true giant or just very tall?  The First Legend informs,"...Og of Bashan, a Rephaim, who according to folklore slept on a huge bed which had a
frame of iron. It was about fourteen feet long and six feet wide. (See
Deuteronomy 3:11)." Og seems a giant, at a time, when people were shorter in stature than today?  What makes Og of interest?  In the article, according to legend, it's maintained, King Og, who lived anywhere from 900 to 3,000 years, ".. knows Noah, Abraham and Moses three of the greatest Biblical heavyweights in prehistory. Two of the three are from Mesopotamia. So old King Og is of truly mythical...proportions." The giant king of an ancient race rises in stature further when reminded: "The Biblical tale of the defeat of the Rephaim includes Moses, the greatest of the prophets, and Og the king of the 'giants'. A very powerful story in and of itself. Og is elevated by association of being defeated by Moses. He must have been powerful and well known to the writers of this story. (Actually, Moses is supposed to have written it)," informs article.

Are reasons little is known about King Og, because he's part of a taboo subject  - "Forbidden History of The Nephilim"?    Nephilim ("the fallen") are offspring of angels coupling with human women, and represent, a sensitive subject repressed in history.   The Rephaim are simply the most notable tribe of Nephilim. King Og of Bashan was, himself, a Rephaim.

The First Legend writer offers argument for the cairn added thousands of years later as plausible and appropriate resting place for the king:

"The earliest date for Gilgal Rephaim is around 3,000 BC based on the radiocarbon dating of potsherds, lichenometric tests and the astronomical alignment of the summer solstice...At about 1,000 BC the central cairn was constructed and is considered to be a dolmen albeit a very large one. So it appears that Gilgal Rephaim was built over a span of about 2,000 years. Perhaps a better term is repurposed. Gilgal Rephaim was built first as an astronomical observatory and cultic center and then only later was an elaborate cairn built at its center. No bones found which is probably due to earlier looting. Since this structure was an agricultural calendar it would not have been accurate 2,000 years later (concerning alignments of certain constellations and stars such as Sirius) and that may have allowed the building the cairn at its center. This tomb has been associated by some with the king of the Rephaim - King Og. I think this is entirely possible even probable. Built at such an early date it is around two thousand years before the Iron Age. The later central carin is constructed during the Iron Age and built for a person of the greatest renown. It is a cosmic location that marked the solstices and equinoxes...King Og was the King of Bashan which includes the Golan Heights on which Gilgal Rephaim is built. It is the high ground on which many dolmens are also built. King Og is presumably from the Iron Age the time of the construction of the cairn. Therefore, King Og could have been buried within Gilgal Rephaim. I like to think so."

It seems a fitting end for a legendary king of mythical proportions. We may never know with certainty, but represents a good guess, the final resting place of King Og may be Gilgal Rephaim.  The cairn at Gilgal Rephaim can be visited below.