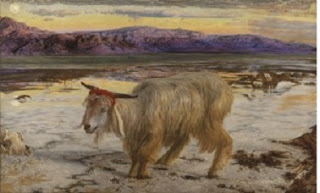 One for the Lord, One for Azazel

You ever wonder where saying "scapegoat" originated? Tracy R Twyman reveals ancient cultural origins of scapegoating in  One for the Lord, One for Azazel." Azazel is the original scapegoat. Twyman describes Yom Kippur ritual from the Book of Leviticus:

"Azazel is mentioned in The Book of Leviticus. Here the temple rituals for the Israelites are specified. One of them involves the sacrifice of two goats on the holy day of 'Yom Kippur,' the Day of Atonement. In Chapter 6, God tells the high priest Aaron to “place lots upon two goats, one marked for the Lord, and the other marked for Azazel.”
The Azazel goat was marked with a red string tied around his head. While the goat for the Lord was killed at the temple as an atonement sacrifice, the Azazel goat, or “scapegoat,” as it is often termed, was forced, like Azazel in The Book of Enoch, to bear the burden of everyone else’s sin. The priest would confess the sins of the community with his hands placed on the head of the goat, laying those sins upon him. The goat was then led off into the desert and pitched over the side of a rocky cliff. A white clothe was also affixed to the door of the temple sanctuary, and it would supposedly turn red the moment the dead goat hit the bottom of the cliff."

Twyman goes further in placing Azazel in historical perspective as part of the bloodline of the goats! The current article is part 8 of series, "Baphomet; The Mystery of Mysteries Unveiled." Twyman makes vague nebulous references to ancient past easy to read!  Who are the goats?  You'll have to read on to find out!  Twyman makes it simple for the rest of us!