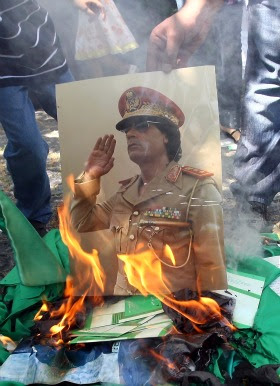 order out of chaos as libya operation reaches endgame

from intel hub: As the corporate media is ablaze with reports that the Libyan rebels are set to take Tripoli from Gaddafi, it is important to remember that these rebels are NOT freedom fighters, rather they are CIA run, Al Qaeda connected murderers. This so called liberation of Libya is the EXACT opposite of what the corporate media is actually reporting. NATO and the Libyan rebels have killed thousands of civilians while at the same time the corporate controlled media pretends we are fighting for human rights. The coverage that is currently taking place in Libya is nothing less than pure propaganda ordered up by the CIA and NATO as support for this illegal war hits news lows. As the corporate media continue to try to make the American believe that former CIA agents and 4 star generals are somehow not at all bias, the fact remains that this war is legal, has killed thousands, and has been in support of Al Qaeda.