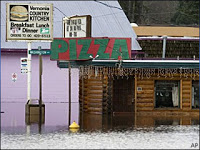 from katu: With communications down in much of the state smacked by the recent storm, state emergency officials are calling ham radio operators heroes.

When even state police had difficulty reaching some of their own troops, ham radio worked, setting up networks so emergency officials could communicate and relaying lists of supplies needed in stricken areas.

A network of at least 60 volunteer amateur radio operators working along the coast and inland helped keep crucial systems such as 911 calls, American Red Cross and hospital services connected.

Amateur radio works on a set of radio frequencies above the AM broadcast band. Operators use their own equipment to communicate with other operators, using different equipment and frequencies than emergency responders.

Sometimes it takes creativity and a lot of leg work, such as setting up a new link on the top of a mountain when no other options are available.

Steve Sanders, a spokesman for District One of the Amateur Radio Emergency Service, said the storm was a "poster child" for what his group does.