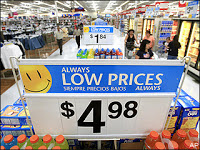 oregon panhandlers raking in the green

from ap: A police survey says panhandlers outside Wal-Mart in Coos Bay can make $300 a day. Inside, it takes a clerk a week to make that much.

Police say people who have a problem with that needn't look to the law - asking for money is considered protected free speech.

Coos Bay authorities say most panhandlers are not criminals.

Coos Bay Police Captain Rodger Craddock says most have lived in the city a long time and they actually have homes. Craddock says, "This is just their chosen profession."

He says most are docile, and that people should report those who are not.

Bob More, director of housing and emergency services at South Coast Community Action, says many panhandlers are there for the money - to feed their addictions.

He suggested a voucher system involving tickets people could give that are good for a meal or bed in a shelter.