Orson Welles’ ‘War Of The Worlds’ 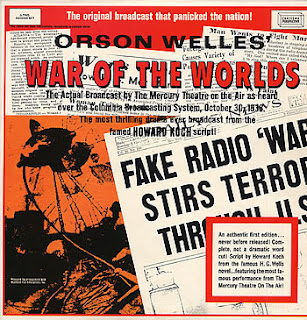 The radio adaptation of H.G. Wells' "War of the Worlds," occupies unique place in American culture. Orson Welles' October 30, 1938 radio broadcast produced widespread fear and panic!  Many Americans were convinced an alien invasion was in progress!  Paul McGuire adds a footnote to historical incident in recent article, "INVASION FROM THE STARS: OPERATION BLUE BEAM & THE TIDES OF THE NEPHILIM WAR," with information not widely known to public:

"The Princeton University Radio Project, under supervision of psychologist Dr. Paul F. Lazarsfeld, Frank Stanton (later head of CBS), and Dr. Hadley Cantril, hired Orson Welles to adapt H. G. Wells' fiction book The War of the Worlds for radio in order to study the behavior
of citizens under panic conditions. War of the Worlds was heard by six million people, 1,700,000 of whom believed in a Martian invasion, and 1,200,000 of whom were frightened enough to take action… either by running away or by preparing to fight the invaders.

Later Dr.Cantril wrote a paper entitled: 'The Invasion From Mars…A Study in the Psychology of Panic.'  Cantril's study examined the power of the radio broadcast media and its effects upon a population under the direct influence of fear."

Wow! It's confirmation of long held suspicion there was a psychological operation component to the Welles broadcast. McGuire informs reader of the specifics and confirms reality. It's still one heck of a sci-fi broadcast, coming up on its 75th anniversary. Check out Media Monarchy's 73rd Anniversary coverage.