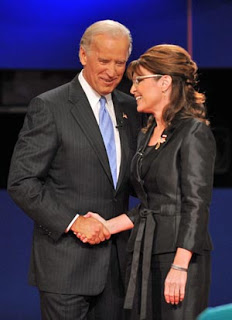 selection ’08: palin vs. biden debate: we both love israel!

from kansas city star: A two-state solution is needed, Sarah Palin says in talking about the future of Israel. A McCain-Palin administration would work with Israel. Joe Biden said he was Israel's biggest friend. And he called President Bush's policy had been a horrible "failure." It has not kept the peace, Biden accurately noted. In fact, he said, the enemies of Israel have been strengthened by the Bush administration's failures. Palin, asked if the administration had failed Israel, said no. But it's good that "we both love Israel," Palin pointed out, almost needlessly. Palin then went into a riff on America's future, saying, "Change is coming." What in the world is she talking about? Biden again pounced, saying he had not heard how McCain's policy "would be any different" from the policies of Bush toward Israel, Pakistan and other countries.