from star-telegram: Rep. Ron Paul wasn't there for most of the first day of the Republican straw poll Friday, but his presence was felt everywhere.

In the "Ron Paul" placards people carried throughout downtown.

In the T-shirt likeness of him that supporters wore around the Fort Worth Convention Center.

In the signs posted in front of the convention center, on vehicles parked there and on some downtown businesses such as Four Star Coffee Bar.

Paul, of Surfside, didn't make it into Fort Worth until his night rally downtown. Nonetheless, he was a candidate who was impossible to ignore.

"We're going to surround the area as more people come," said Paul supporter Christopher Laskoski of Fort Worth. "You will see more ground support for Ron Paul than any other candidate." 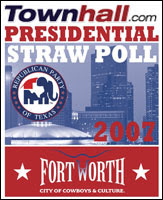 Paul supporters are typically proud of their outsider status, but they yearn for mainstream media attention for him as a top contender for the GOP presidential nomination. Several, including Paul's son, Benbrook doctor Robert Paul, believe that their candidate would be one of the front-runners if the media gave Paul, a Texas congressman and former Libertarian presidential nominee, the attention they think he deserves.

Some Paul volunteers have complained about who can vote in today's poll.

"While we may not win the actual straw poll vote, we want to outnumber any of the other candidates' support to show that he has a strong chance in the actual primary, where all of the people in attendance will be able to vote," volunteer Clayton Slade of Richardson said.

They were outside the convention center Friday, many decked out in orange T-shirts with Paul's likeness saying: "Who is this man? And why is he going to win the Texas Straw Poll?"

In the afternoon, about 30 supporters crashed a rally that Rep. Duncan Hunter, a presidential hopeful from California, held outside the Water Gardens. As Hunter spoke to 50 Republicans about supporting the troops, Paul supporters stood just feet away, holding up Ron Paul signs.

To further cement their friendliness, as Hunter led his audience in a rendition of God Bless America, Paul supporters quickly joined in.

Hunter got 534 votes, or 41 percent of the vote. Former Tennessee senator and actor Fred Thompson, who is expected to announce his candidacy next week but was not at the event, came in second with 266 votes, or nearly 21 percent. Texas congressman Ron Paul came in third with 217 votes, or 17 percent.

Crowd support seemed split between Hunter and Paul, whose supporters waved signs and chanted his name throughout the day. Other candidates attending were Chicago businessman John Cox, who got 10 votes; counterterrorism expert Hugh Cort of Birmingham, Ala., who got three votes; and tool-and-die maker Ray McKinney of Savannah, Ga., with 28 votes.