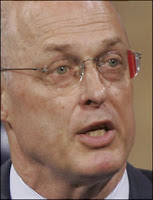 from washington post: Treasury Secretary Henry M. Paulson Jr. plans to call today for the Federal Reserve to be given new, explicit powers to intervene in the workings of Wall Street firms to protect the financial system, adapting his vision of how the financial world should be regulated to reflect the lessons of the collapse of Bear Stearns. "Our nation has come to expect the Federal Reserve to step in to avert events that pose unacceptable systemic risk," Paulson plans to say in a speech today, according to prepared remarks obtained by The Washington Post. But the central bank "has neither the clear statutory authority nor the mandate to anticipate and deal with risks across our entire financial system."

from telegraph: The Royal Bank of Scotland has advised clients to brace for a full-fledged crash in global stock and credit markets over the next three months as inflation paralyses the major central banks. "A very nasty period is soon to be upon us - be prepared," said Bob Janjuah, the bank's credit strategist. A report by the bank's research team warns that the S&P 500 index of Wall Street equities is likely to fall by more than 300 points to around 1050 by September as "all the chickens come home to roost" from the excesses of the global boom, with contagion spreading across Europe and emerging markets. Such a slide on world bourses would amount to one of the worst bear markets over the last century.

from ny post: The latest Big Apple trophy being coveted by oil-rich sovereign wealth funds is the landmark Chrysler Building. Sources say the super-rich Abu Dhabi Investment Council is negotiating an $800 million deal for a 75 percent stake in the Art Deco treasure that has defined the Midtown skyline since 1930... The deal follows last month's sale of the GM Building and three other Macklowe/Equity Portfolio properties for $3.95 billion to a group of investors including the wealth funds of Kuwait and Qatar and Boston Properties.

why you shouldn’t spend that 'stimulus' check 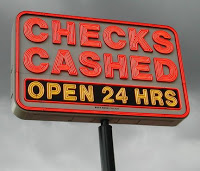 from alternet: If we refused to cash our checks, the value of the dollars in our pockets would go up by more than the face value of the stimulus refund... The reason being that America does not have a hard-money economy, it’s a debt-based fiat currency economy. All the money in circulation in America has been borrowed and then re-lent. So borrowing more money ($168 billion for the stimulus package) and then re-lending it to Americans, as Bush is doing, only increases the debt load and debases the value of the currency outstanding (against a backdrop of stagnant wages and minuscule interest rates for savers).