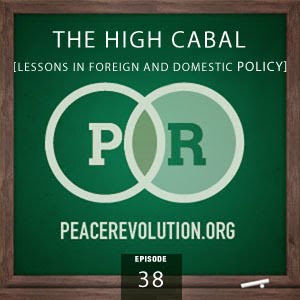 1.     Use the "Donate" buttons at the bottom of these notes, or on the side bar of this site, or the T&H Community, or the T&H dot com site, for “The Ultimate History Lesson: A Weekend with John Taylor Gatto” multi-DVD interview project, currently in post-production. With over 5 hours of interview footage, this is a collection of education which is invaluable.
a. If you donate $50 or more towards the completion of this project, you will receive the entire DVD set; as our way of saying Thanks!

2.     Your invitation to the Tragedy and Hope online critical thinking community
3.     Peace Revolution Podcast’s primary hosting site (2009-2011)
4.     Peace Revolution Podcast’s backup hosting site (2006-2011, also includes the 9/11 Synchronicity Podcast episodes, starting at the bottom of the page)
5.     Tragedy and Hope dot com (all of our media productions, freeto the public)
a. On the top menu, there is a “Trivium” selection, which includes the Brain model discussed in Peace Revolution episodes.
6.     “A Peaceful Solution” by Willie Nelson w/thanks to the Willie Nelson Peace Research Institute
7.     T&H Partner Podcasts: Media Monarchy, Corbett Report, Gnostic Media, & Remedy Radio
8.     www.StartPage.com (It uses Google’s search algorithm, but doesn’t collect your private info and search history)
a. StartPage search engine Firefox add-on
9.     Haileybury and Imperial Service College (on Wikipedia)
10.     East India Company College (on Wikipedia)
Thomas Malthus worked at the British East India Company College
11.     Winston Churchill (on Wikipedia)
The High Cabal
12.     R. Buckminster Fuller (on Wikipedia)
Secret of the High Cabal: Their most valuable asset is anonymity
13.     Col. L. Fletcher Prouty (on Wikipedia)
Col. Prouty spent 9 of his 23 year military career in the Pentagon (1955-1964): 2 years with the Secretary of Defense, 2 years with the Joint Chiefs of Staff, and 5 years with Headquarters, U.S. Air Force. In 1955 he was appointed the first "Focal Point" officer between the CIA and the Air Force for Clandestine Operations per National Security Council Directive 5412. He was Briefing Officer for the Secretary of Defense (1960-1961), and for the Chairman of the Joint Chiefs of Staff.

At times he would be called to meet with Allen Dulles and John Foster Dulles at their home on highly classified business. He was assigned to attend MKULTRA meetings. In this capacity Col. Prouty would be at the nerve center of the Military-Industrial Complex at a time unequaled in American History. He has written on these subjects, about the JFK assassination, the Cold War period, and Vietnamese warfare, and the existence of a "Secret Team". He backs up his his work with seldom seen or mentioned official documents - some never before released.

Fletcher Prouty offers a rare glimpse of "The Power Elite" as described by Buckminster Fuller, or "The High Cabal" as Winston Churchill referred to them; and how they really operate. Those who have not been in a position to witness events such as these from the inside would not understand how invisible but ultimately effective they and their power structures are.