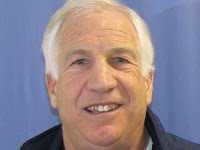 pedophilia: men who can’t help themselves

Pedophilia represents a grim degeneration, where men cannot help themselves and believe they can get away with it. The Penn State scandal is only the latest perturbation to rear its ugly head. Paul Drockton writes in, "Penn State and Boystown Cover-up Similarites": "...it is important to recognize other interesting connections in this story...". Drockton sees parallels where authority seems to back corruption.  Wendell Courtney legally represents, both, Penn State Univ. and the Second Mile Charity founded by Jerry Sandusky, the alleged perp. Ray Gricar, who was  prosecutor in 1998 allegations against Sandusky with a 10-yr old boy, dissappeared in 2005 along with a hard drive from his computer. A similar loss of legal recourse occurred, when private investigator Gary Caradori died in a plane crash, while investigating scandal that engulfed small Franklin Credit Union for a state legislative committee. The Caradori death sounded a death knell for investigation, which involved interstate transport of Boystown children. "The Franklin Cover Up,"(pdf download), a book by John Decamp first revealed, perhaps, the most sordid incident in American history. The present writer suspects Drockton may be right about a wider scandal, possibly, illicit trade with young boys - the commodity.