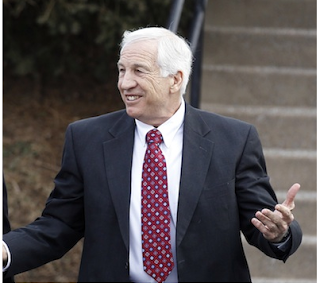 Joe Amendola, attorney for accused pedophile Jerry Sandusky, was back in court this past Monday to plead for more details about the allegations against his client, a former Penn St football coach. Amendola isn't satisfied that there's enough details about dates and locations. Perhaps most notably, Judge John Cleland did concede, according to Penn Live article: "Judges have thrown out cases where children couldn’t pin down specific time frames." Deputy attorney general Joseph E. McGettigan III shot back at Amendola in front of Centre County courthouse, "Amendola would have had a great opportunity to question each alleged victim under oath at a preliminary hearing, but Sandusky chose to waive that right, and instead presented his case to the press on the courthouse steps." You have to wonder if there's a real possibility of dismissal; the court system may well be compromised. The May 14 trial date is fast approaching and pivotal decisions will be made in next few weeks. There's also a great video with intrepid Sara Ganim reporting on the case.