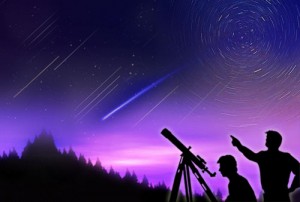 A coming attraction to your night sky in the northern hemisphere are Perseids. "The stream of debris is called the Perseid cloud and stretches along the orbit of the comet Swift-Tuttle. The cloud consists of particles ejected by the comet as it travels on its 130-year orbit. Most of the dust in the cloud today is around a thousand years old. However, there is also a relatively young filament of dust in the stream that was pulled off the comet in 1862." A Universe Today article, 'MeteorWatch is Coming! Look for Perseids With the Rest of the World," trumpets the meteorites which peak at 50-60 per hour in the predawn hours of Aug 12-13. MeteorWatch will enable you to share your skywatching with rest of the world through Twitter. A very good trailer for the spectacle is available here. Get off the couch this August and go out to catch a view of the nightsky!