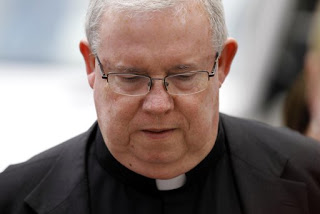 from Reuters:  Monsignor William
Lynn was sentenced to three to six years in jail for covering up sex
abuse claims at the Archdiocese of Philadelphia. Lynn is the first
Catholic priest to be sentenced to prison for his mishandling of sex
abuse claims. Lynn managed priest assignments
and child sexual assault complaints at the church from 1992 to 2004.
His child endangerment charges stem from his failed oversight of
defrocked priest Edward Avery, who was sentenced to a possible five-year
prison term for sexually assaulting an altar boy in 1999. By
not stopping priests like Avery, the judge said that Lynn "enabled
monsters in clerical garb ... to destroy the souls of children," reports
The Associated Press. However,
where the adult engages in a "course of conduct" of endangering
children, that person can felony charges and a possible seven-year
prison term.In Monsignor William
Lynn's case, his defense lawyers sought probation, arguing that few
people actually serve long prison sentences for child endangerment. At
the least, they added that Lynn should not receive a longer prison
sentence than Avery, the priest who actually did the assaulting, reports
the AP. In
Pennsylvania, child endangerment is usually treated as a misdemeanor. So
a family member or a church official who places a child in harm's way,
could face imprisonment, but the penalty is usually not that severe. However, the judge could
not get over the fact that Lynn had many opportunities, and several
years, to address the sex abuse problem. And so she handed down an
almost maximum prison term, one that exceeded what Avery received. The
judge told the Philadelphia Catholic priest that he knew full well what
was right, but chose wrong in not stopping the child sex abuse.