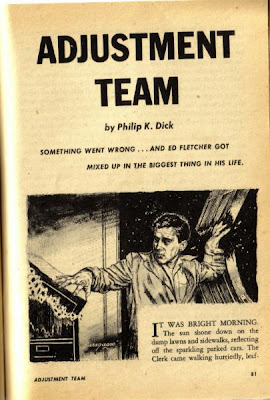 The "Adjustment Team," a science fiction story by Philip K Dick, first appeared in fall of 1954 in Orbit Science Fiction. Ed Fletcher, the story's protagonist, misses the designated adjustment for sector T137 and is brought in front of the Old Man in the top administrative chamber. The Old Man, who everyone eventually meets, warns Fletcher he will be allowed to return without being de-energized and adjusted, only if he promises to not tell anyone what he's seen! The story is better understood by also reading a biographical profile of Dick. Dick never fully accepted the world we live in "as not up to his standards." A writer, who suffered in life, found possibilities missing in this world in science fiction. Philip K Dick just seems ahead of the curve much like George Orwell in questioning what is in front of us. Dick's stature has grown since his death in 1982 from heart failure, hastened by addiction to amphetamines. To question our reality and humanity is a "phildickian" notion. Adjustment Team in .mp3 audio is available for your listening pleasure.

The short story landed in the public domain when copyrights expired, an interesting tale itself. The Adjustment Bureau movie seems brought to production, as a result, of playing word games with copyrights? An Adjustment Bureau trailer is available. It is only the latest Dick story made into a movie, most notable is Blade Runner. Philip K Dick is an author anyone can relate, who has a beef with our de-energized and adjusted 21st Century lives!