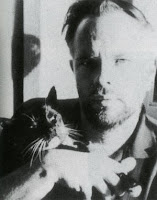 Science Fiction writer Philip K Dick died on March 2, 1982 of a heart attack after having two strokes.  Fan websites, Philip K Dick Fans and Total Dick-Head commemorate date with remembrances.  You can download great interviews about Dick here.  You may sample -  free -science fiction by Dick on mp3 here. Dick is best known for the films based on his works: Blade Runner, Total Recall, Minority Report and The Adjustment Bureau. A science fiction writer, ahead of his time, Dick continually examined reality and recurrent theme that there isn't a single objective reality - everything is a matter of perception.  Dick grows in popularity with time as we catch up to him!