pilot’s gun goes off on flight from ‘new world airport’ 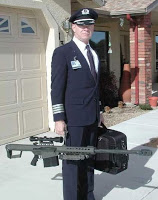 from danger room: For those who always thought that arming pilots on commercial flights was a bad idea, today’s incident will hardly come as a surprise: a gun accidentally went off in the cockpit of a U.S. Airways flight. ABC News reports: “The pilot, who both the TSA and US Airways declined to identify, was a member of the Federal Flight Deck Officer program, an initiative put in place after the Sept. 11, 2001, terrorist attacks. The initiative allows authorized members of cockpit crews to carry weapons on board.”

update1: pilot whose gun fired suspended; no word on bullet’s fate
from charlotte observer: US Airways has grounded the pilot whose gun discharged accidentally during a flight from Denver to Charlotte over the weekend, the airline said Monday… Citing the ongoing investigation and security concerns, airline and federal officials remained tight-lipped Monday about many of the details surrounding the incident. They declined to discuss the damage to the plane, where the bullet struck and why the gun fired. 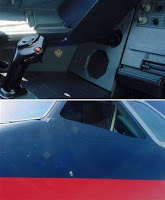 from charlotte observer: A bullet fired by a US Airways pilot Saturday as his plane was preparing to land in Charlotte penetrated the left side of the cockpit and went through the aircraft’s fuselage. According to a report by Charlotte airport police and photos of the Airbus A319 jet, the bullet pierced the left side of cockpit’s wall and exited to the left of the aircraft’s nose. Although the fuselage was punctured, air safety experts said most planes can withstand such a breach and continue flying normally.

update3: US airways pilot identified; holster suspected in shooting
from mcclatchy: The pilot who accidentally fired a pistol while his US Airways flight was landing last weekend in Charlotte has been identified as a 55-year-old former Air Force pilot who lives in Pittsburgh, Pa. The pilot, James Langenhahn, declined to discuss the shooting Thursday night. “As much as I’d like to talk about it,” he said. “I can’t right now.”

from washington times: Some jurisdictions across the United States have been arming rank-and-file officers with high-powered assault rifles for a decade or more. But law-enforcement officials say that trend has accelerated in the last year because of greater numbers of shootouts, standoffs in which police were outgunned, rising officer deaths and mass shootings of civilians by heavily armed gunmen. “If you get into a firefight, you want to be the winner,” said Scott Knight, police chief of Chaska, Minn., and chairman of the firearms committee for the International Association of Chiefs of Police. “Our departments are moving to those weapons out of necessity across the country.”