‘poisoned’ book delivered to obama and all of congress 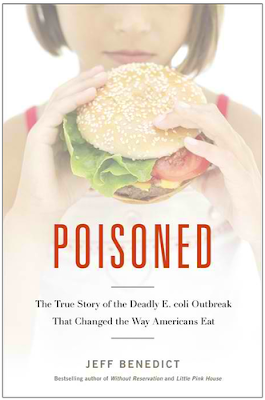 from food poison journal: Lindsey Ward of WSLS reported that author Jeff Benedict provided the President, First Lady, Secretary Vilsack and Secretary Sebeilus, along with each member of the House and Senate, a copy of the book ‘Poisoned.’ The book tells the story, from an attorney's perspective, of the last major headlining E. Coli outbreak at Jack in the Box in 1993. The book, released in May, couldn't come at a better time to educate the public on food safety concerns. “There have been about six or seven new strains of E. Coli that have surfaced since 1993 that are just as lethal and we don't test for them and we don't inspect for them and they're in our food,” Benedict explained. The author says “Poisoned” was mailed to each member of Congress, heads of the USDA and FDA, and even President Obama himself, to raise awareness to our leaders that the current crisis in Germany could cross the sea. Benedict says most members of Congress will receive their book Tuesday or Wednesday, but some got their copy on Friday and already he's received positive feedback and expects more in coming weeks. With a congressional decision on FDA funding just around the corner, Benedict is worried the money to cover the recently passed Food Modernization Act could be cut, and therefore no new testing on new strains of E. Coli. “There may be a vote as early as next week in the Congress on whether to cut the FDA's budget and if they do that they will basically cut any chances of the kind of testing that needs to be done on these E. Coli pathogens.” Testing he says is a must because it could be a deadly strain sickening Americans the next time.