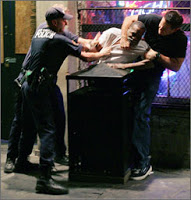 Police Brutality & Torture Are Normal After 9/11

Police brutality cases on rise since 9/11

from lew rockwell: USA Today is reporting on an increase in prosecutions of police officers for uses of "excessive force" (I'd rather drop the euphemisms and go with "beatings and tortures") or other tactics that "violate victims' civil rights" (I would have used "murder").

According to the article, "the heightened prosecutions come as the nation's largest police union fears that agencies are dropping standards to fill thousands of vacancies and 'scrimping' on training."

from capital times: Torture has become normalized in American society post-9/11 and that is why the public is not outraged when the U.S. government does it, a Beloit College sociology professor told a Madison audience Tuesday night in the Meriter Main Gate auditorium.

Carol Wickersham, an anti-torture activist who is also a Presbyterian minister, showed a picture of actor Kiefer Sutherland, who plays a counterterrorism agent on the The Emmy and Golden Globe award-winning Fox show "24," and asked if anyone in the room knew who he was.

The group of 30, members of the Dane County chapter of the United Nations Association, was silent.