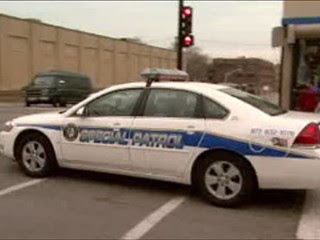 police may be privatized by foreign company in chicago

...like that crazy movie where the detroit police are run by a private corporation which values profit over people. but that's just sci-fi, it could never happen in real life...

from cbs: They're private security guards, already on patrol, but they may soon have the powers of Chicago Police officers. As CBS 2 Chief Correspondent Jay Levine reports, the private security officers now on patrol on the city's Far South Side are expected to have their powers expanded as part of a citywide ordinance now being prepared. But officials are questioning whether this means public safety is being outsourced. Mayor Richard M. Daley has already privatized many city functions. The Chicago Skyway has been leased to a Spanish conglomerate. Midway Airport is run by a Canadian company. The parking meters were sold to a firm run by Morgan Stanley, and as a result, the cost of parking in the city has skyrocketed. But the question is whether another foreign firm providing cops on patrol may be privatization gone too far.

video update: parking meter revolt in chicago
from cbs2chicago: They are taking more of your quarters every day. And Chicagoans are in revolt. While some are saying enough by avoiding them, others are taking out their frustrations on the parking meters - literally! CBS 2 Chief Correspondent Jay Levine reports with the anger behind the new meter rate increases.