from fcw: The Homeland Security Department will soon begin collecting digital fingerprints and photographs from lawful permanent residents of the United States and people seeking to enter the country on an immigration visa or as refugees. The biometric data will be collected from additional groups of those persons when they enter the U.S. starting Jan. 18 as part of DHS’ U.S. Visitor and Immigrant Status Indicator Technology (US-VISIT), officials said Dec. 18. In a statement, DHS officials called the expansion a “positive step forward in a process designed to further improve public safety and national security while ensuring the integrity of the immigration system.”

epa veils hazardous substances
from jsonline: The U.S. Environmental Protection Agency routinely allows companies to keep new information about their chemicals secret, including compounds that have been shown to cause cancer and respiratory problems, the Journal Sentinel has found. The newspaper examined more than 2,000 filings in the EPA's registry of dangerous chemicals for the past three years. In more than half the cases, the EPA agreed to keep the chemical name a secret. In hundreds of other cases, it allowed the company filing the report to keep its name and address confidential.

fda stuns scientists, declares mercury in fish to be safe for infants, children, expectant mothers!
from natural news: In a truly astonishing betrayal of public safety (even for the FDA), the U.S. Food and Drug Administration today revoked its warning about mercury in fish, saying that eating mercury-contaminated fish no longer poses any health threat to children, pregnant women, nursing mothers and infants. Last week, the FDA declared trace levels of melamine to be safe in infant formula. A few weeks earlier, it said the plastics chemical Bisphenol-A was safe for infants to drink. Now it says children can eat mercury, too. Is there any toxic substance in the food that the FDA thinks might be dangerous? (Aspartame, MSG, sodium nitrite and now mercury...) This FDA decision on mercury in fish has alarmed EPA scientists who called it "scientifically flawed and inadequate," reports the Washington Post.

'smart' surveillance system may tag suspicious or lost people
from newswise: Engineers here are developing a computerized surveillance system that, when completed, will attempt to recognize whether a person on the street is acting suspiciously or appears to be lost. Intelligent video cameras, large video screens, and geo-referencing software are among the technologies that will soon be available to law enforcement and security agencies. In the recent Proceedings of the 2008 IEEE Conference on Advanced Video and Signal Based Surveillance, James W. Davis and doctoral student Karthik Sankaranarayanan report that they've completed the first three phases of the project: they have one software algorithm that creates a wide-angle video panorama of a street scene, another that maps the panorama onto a high-resolution aerial image of the scene, and a method for actively tracking a selected target.

entrapment? 5 convicted in fort dix plot
from raw story: Five men whom attorneys said paid FBI informants prodded into exploring their deepest fantasies about waging jihad on America were convicted in federal court Monday of conspiring to kill US soldiers but acquitted on attempted murder charges. The men allegedly planned to attack Fort Dix in New Jersey, although defense lawyers argued that they never intended to carry out the plot and were drawn into making incriminating statements by the informants, one of whom was an illegal immigrant on probation for bank fraud and another who was paid $150,000 to secretly record the men. The verdict was met with intense skepticism in the Muslim community.

air force nu-metal band will 'rock your face off' 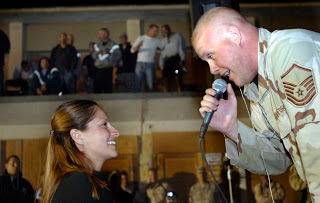 from danger room: Somebody drop a satellite-guided bomb on my head. I'm not sure if I can take another note of Max Impact, the Air Force's official nu metal band. Or their press releases, which were clearly written by a member of The Onion's editorial staff... By the way, Max Impact is one of seven official Air Force musical ensembles. And that doesn't count "Tops in Blue," the service's singin', swingin', family-friendly, Vegas-style review.