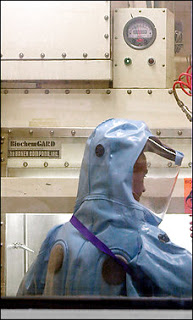 a slew of warnings on nuclear, chemical & biological terrorism prompt worries of fearmongering (or fears of worrymongering)

from usnews: After a series of dire new warnings about possible terrorist threats—capped by a government commission's report that terrorists are likely to stage a biological or nuclear attack somewhere in the world during the next five years—some experts are urging officials "to retire the fear card," as California Rep. Jane Harman puts it. "We need to educate and inform the American people, not terrify them with alarming details about possible threats to the homeland," she said, reacting to the 132-page report from the Commission for the Prevention of Weapons of Mass Destruction Proliferation and Terrorism released this week. Harman, who heads the House Homeland Security Subcommittee on Intelligence and Terrorism Risk Assessment, added, "It's time for the rhetoric about that threat to calm, instead of inflame, an anxious public." 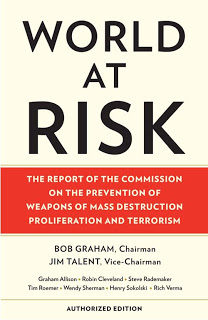 The drumbeat started last month, when Director of National Intelligence Mike McConnell said that the potential for a WMD attack in the coming decades is growing. The probability is increasing, he said, that the world will see "large casualty terrorist attacks using chemical, biological, or, less likely, nuclear materials." And the U.S. intelligence community recently released a study warning of an increased risk of the use of mass-casualty weapons by 2025. 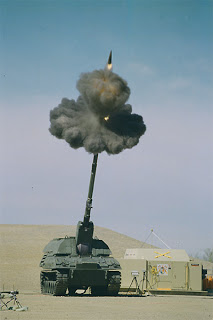 from washington post: The leader of the U.S. Strategic Command said yesterday that "time is not on our side" to modernize the nation's nuclear weapons stockpile, particularly as China and Russia upgrade their nuclear warheads and delivery systems. "The path of inaction is a path leading toward nuclear disarmament. . . . The time to act is now," Air Force Gen. Kevin P. Chilton told an audience of government, military and civilian arms experts attending the Nuclear Deterrence Summit in Washington. But Rep. Ellen O. Tauscher (D-Calif.), chairman of the House Armed Services subcommittee on strategic weapons, told the same audience that the nation's nuclear modernization program was in a "holding pattern" until the Obama administration could review studies that are to be completed next year. Chilton said he was concerned that Congress had effectively killed the Bush administration's Reliable Replacement Warhead program, which is designed to provide a modern, safer warhead with no new capabilities before the end of this decade. Expressing concern that the nation's Cold War stockpile is aging, Chilton said that "a reliable [nuclear] inventory supports nonproliferation goals."

from daily mail: State officials are to be given powers previously reserved for times of war to demand a person's proof of identity at any time. Anybody who refuses the Big Brother demand could face arrest and a possible prison sentence. The new rules come in legislation unveiled in today's [dec3] Queen's Speech. They are presented as a crackdown on illegal immigration, but lawyers say they could be applied to anybody who has ever been outside the UK, even on holiday. The civil rights group Liberty, which analysed clauses from the new Immigration and Citizenship Bill, called them an attempt to introduce compulsory ID cards by the back door.

german police get powers to hack into home computers
from telegraph: Under a compromise between the hardline Interior Minister Wolfgang Schaeuble and dissenting MPs, Germany's Parliament is put unprecedented power in the hands of the Federal Criminal Police (BKA). New laws, some of the toughest in Europe, will also allow police to bug and photograph suspect's homes, tap their phones and track the location of their mobile calls. Under the compromise, the police will need a judge's approval before using the Trojans, even in an emergency. Trojans will carry "Remote Forensic Software" that can search hard drives and send evidence back to investigators without their having to enter the suspect's home.

berlusconi plans to use g8 presidency to 'regulate the internet'
from the register: Italian president and media baron Silvio Berlusconi said today that he would use his country's imminent presidency of the G8 group to push for an international agreement to "regulate the internet". Speaking to Italian postal workers, Reuters reports Berlusconi said: "The G8 has as its task the regulation of financial markets... I think the next G8 can bring to the table a proposal for a regulation of the internet." Italy's G8 presidency begins on January 1. The role is taken by each of the group's members in rotation. The holder country is responsible for organising and hosting the G8's meetings and setting the agenda. Italy's last G8 presidency in 2001, also under Berlusconi, was marred by riots at the annual meeting in Genoa.

bush fcc chairman considering 'porn-free Internet'
from raw story: Bush Federal Communications Commission Chairman Kevin Martin is still considering a proposal to create a free, porn-free Internet, according to today's Wall Street Journal: "The free Internet plan is the most controversial issue the agency will tackle in December. Mr. Martin shelved plans to consider a wider variety of sticky issues pending at the agency, including a request by the Hollywood studios to hobble TVs and set-top boxes so studios can offer copy-protected theatrical releases sooner. The proposal to allow a no-smut, free wireless Internet service is part of a proposal to auction off a chunk of airwaves. The winning bidder would be required to set aside a quarter of the airwaves for a free Internet service"... Martin was Deputy General Counsel for the Bush-Cheney 2000 recount.

courtroom showdown: bush demands spying telecom amnesty
from threat level: The Bush administration on Tuesday will try to convince a federal judge to let stand a law granting retroactive legal immunity to the nation's telecoms, which are accused of transmitting Americans' private communications to the National Security Agency without warrants. At issue in the high-stakes showdown... are the nearly four dozen lawsuits filed by civil liberties groups and class action attorneys against AT&T, Verizon, MCI, Sprint and other carriers who allegedly cooperated with the Bush administration's domestic surveillance program in the years following the Sept. 11 terror attacks. The lawsuits claim the cooperation violated federal wiretapping laws and the Constitution. (28kb PDF) In July, as part of a wider domestic spying bill, Congress voted to kill the lawsuits and grant retroactive amnesty to any phone companies that helped with the surveillance; President-elect Barack Obama was among those who voted for the law in the Senate. On Tuesday, lawyers with the Electronic Frontier Foundation are set to urge the federal judge overseeing those lawsuits to reject immunity as unconstitutional. At stake, they say, is the very principle of the rule of law in America. 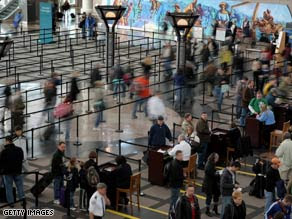 from cnn: Keep your shoes and belts on: Waiting in long airport security lines to pass through metal detectors may soon be a thing of the past. Security experts say focus is shifting from analyzing the content of carry-ons to analyzing the content of passengers' intentions and emotions. "We are seeing a needed paradigm shift when it comes to security," says Omer Laviv, CEO of ATHENA GS3, an Israeli-based security company. "This 'brain-fingerprinting,' or technology which checks for behavioral intent, is much more developed than we think." Nowhere is the need for cutting-edge security more acute than Israel, which faces constant security threats. For this reason, Israel has become a leader in developing security technology.