is america already a police state?

737 US military bases = global empire
from global research: With more than 2,500,000 U.S. personnel serving across the planet and military bases spread across each continent, it's time to face up to the fact that our American democracy has spawned a global empire.

from latimes: Marine Corps Reserve Lance Cpl. Matthew Barlow rides along with Los Angeles County coroner's personnel to retrieve the body of a homeless man found in Hazard Park in Boyle Heights. He is among 14 Marines who were embedded at the coroner's office for three weeks to learn how to collect bodies and personal belongings and identify the dead. The troops are in a special unit that soon will deploy to Iraq, where they will receive the bodies of fallen troops and prepare them for the flight home to the United States.

why the end of america is closer than you think

maher says talk of fema camps could incite the mcveighs

from nevada daily mail: More than 200 soldiers from the newly formed 1st Battalion, 138th Infantry Regiment of the Missouri Army National Guard came to Camp Clark from across the state on Saturday, March 14, to take part in training in several different combat scenarios. This is the first time Missouri has had an infantry unit in more than 35 years. The new unit, headquartered in Kansas City, has companies and detachments across the state and will have more than 800 soldiers when it reaches full strength, according to a Missouri Army National Guard press release.

britain trains civilian anti-terror force
from presstv: Britain has launched a clandestine alliance that recruits citizens and trains them to act as undercover agents against terror suspects. British Prime Minister Gordon Brown said the initiative is vital for safety in the UK. According to him, tens of thousands of civilians have already been trained for the purpose. Brown said Sunday that the individuals range "from security guards to store managers" who know how to "deal with an incident and know what to watch for as people go about their daily business in crowded places such as stations, airports, shopping centers and sports grounds." British Home Secretary Jacqui Smith said the strategy, called Contest Two, would be more open than past counter-terrorism efforts.

dozens in cps have criminal records
from sacbee: Drug possession, domestic violence, repeatedly driving drunk, assault with a deadly weapon – any one of these charges or convictions could lead child protective services workers to remove children from a home or force a parent into counseling. But all of those crimes and many others appear in the backgrounds of employees of Sacramento County's Child Protective Services, a Bee investigation has found. A review of the agency's 969 workers employed as of Oct. 1 found that at least 68 individuals – 7 percent of the work force – have criminal records in Sacramento County alone. The number is likely to be even higher because some names were too common to retrieve all criminal complaints linked to them, and records in other counties were not searched. 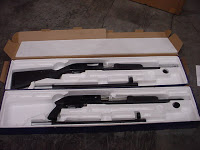 from local12: Customs and Border Protection now say a paperwork error may be partly to blame for guns it confiscated at the international airport. The weapons were seized on Monday. Officers say the shipment was listed as "toys" from Turkey. It contained sixty 12-gauge shotguns and 177 pistols. Federal agents say they tested a shotgun and it fired live ammo. The pistols are designed for theatrical use. No charges have been filed, because the investigation is on-going.

despite protests, dekalb goes with marines school
from ajc: DeKalb County school officials are forging ahead with plans to open a first-of-its-kind military-style public high school, despite a growing campaign by activists upset at the involvement of the U.S. Marines. “It’s the worst thing that’s ever happened in Georgia education,” said Michael Burke, a DeKalb resident and spokesman for the Georgia Veterans Alliance, a group that aligns itself with the work of the Georgia Peace and Justice Coalition, among others. “The whole thing is just a ploy” to help the Marines recruit, Burke said. “We expect to fight it tooth and nail.” That response irritated DeKalb school system officials. They said it stereotypes the proposed Marine school and students who may be interested in it. The protests — mounted largely through e-mails and letters — have not deterred them, they said.