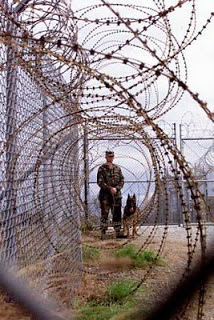 from paul joseph watson: A new bill introduced in Congress authorizes the Department of Homeland Security to set up a network of FEMA camp facilities to be used to house U.S. citizens in the event of a national emergency. The National Emergency Centers Act or HR 645 mandates the establishment of “national emergency centers” to be located on military installations for the purpose of to providing “temporary housing, medical, and humanitarian assistance to individuals and families dislocated due to an emergency or major disaster,” according to the bill. The legislation also states that the camps will be used to “provide centralized locations to improve the coordination of preparedness, response, and recovery efforts of government, private, and not-for-profit entities and faith-based organizations”. Ominously, the bill also states that the camps can be used to “meet other appropriate needs, as determined by the Secretary of Homeland Security,” an open ended mandate which many fear could mean the forced detention of American citizens in the event of widespread rioting after a national emergency or total economic collapse. Many credible forecasters have predicted riots and rebellions in America that will dwarf those already witnessed in countries like Iceland and Greece. With active duty military personnel already being stationed inside the U.S. under Northcom, partly for purposes of “crowd control,” fears that Americans could be incarcerated in detainment camps are all too real.

from prnewswire: Science Applications International Corporation (NYSE: SAI) today announced it has been awarded a prime contract by the Defense Advanced Research Projects Agency (DARPA) to help develop an affordable alternative to petroleum-derived jet fuel (JP-8) from agricultural and aquacultural feedstock materials. The contract has a total value of up to $25 million if all phases of the development program are completed. Work will be performed primarily in Georgia, Florida, Hawaii and Texas. DARPA's BioFuels program explores energy alternatives and fuel efficiency efforts in a bid to reduce the military's reliance on traditional fuel. For an alternative to be viable, the fuel must be produced at a cost that is economically competitive with current supply costs. Under this contract, SAIC will lead a team of industrial and academic organizations to develop an integrated process for producing JP-8 from algae at a cost target of $3/gal. SAIC and its team will develop technologies and processes to help achieve DARPA's goal including integrating algae strain selection, water and nutrient sourcing, farming, harvesting, separation, triglyceride purification, algal oil processing, and economic modeling and analysis.

update: saic awarded $85m contract by the library of congress

from techradar: Robot maker iRobot announced its 2008 financial figures today, but more interestingly predicted that sales of military robots would soar in 2009. The cybernetic manufacturer revealed that its government and industrial business grew more than 50 per cent in the last quarter compared with the same period a year ago, taking its revenues for the year to over $305 million (£210 million). Domestic robots like the robo-cleaner Roomba 500 and the gutter-scouring Looj helped international sales double year-on-year, but it's in the military sector that iRobot predicts the greatest growth. iRobot has already been awarded $2 million (£1.4 million) by the US Congress to develop the Warrior 700: a powerful and rugged robot for use in danger zones and inaccessible areas. The Warrior 700 will perform a variety of critical missions, including providing real-time video, audio and sensor readings to combat troops and local law-enforcement SWAT teams. The robot features an advanced digital architecture and a multi-mission chassis that supports payloads of up to 68kg (roughly equivalent to a skinny adult or fat kid). The company expects more military sales in 2009, which should supplement the fall in US consumer sales as they slacken off due to the recession. 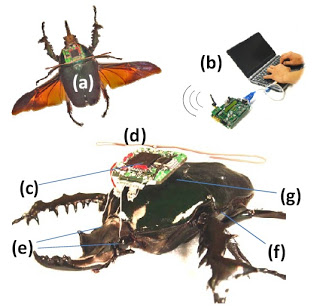 from danger room: Perhaps you are not particularly worried about the idea of remote-controlled insects spying on you, on behalf of the Pentagon. Darpa-funded researchers at the University of California, Berkeley would like to disabuse you of that notion. They've succeeded in "controlling a live rhinoceros beetle by radio," Tech-On reports. Researchers hooked a series of six electrodes up to the brain and muscles of the insect. Then, during a demonstration at the MEMS 2009 academic conference in Sorrento, Italy, "they equipped the beetle with a module incorporating a circuit to send signals to the electrodes, wireless circuit, microcontroller and battery. The university has so far succeeded in several experiments of electrically controlling insects, but it used a radio control system this time." ... It's one of a number of Darpa-backed experiments, to develop insect spies. The University of Michigan has its own cyborg beetles. University of Georgia researchers are implanting mini-machines into larval moths, so they can live to a ripe, old, remote-controlled age. Then there's the idea to use sex-starved insects to follow bank robbers. Seriously. 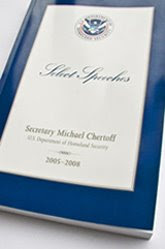 from thinkprogress: The Department of Homeland Security recently sent out an entire book honoring former Secretary Michael Chertoff’s “Select Speeches” from 2005-2008. The 315-page book contains 36 of Chertoff’s speeches and press conferences (many of which — if not all — are most likely available online). ThinkProgress recently obtained a copy of the book and contacted DHS to find out how much taxpayer money was spent on the book’s production. However, we received no response. But Michele Nix, a former top official for former DHS Secretary Tom Ridge, told ThinkProgress that this homage seemed to be exclusive to Chertoff, as the department did “nothing” similar for her former boss. Let us know in the comments section if you remember any of Chertoff’s speeches being particularly memorable.