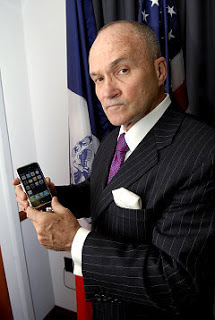 from danger room: The New York Police Department wants to be able to shut down cell phones, in case of a terrorist attack. During last month's massacre in Mumbai, terrorist handlers over micromanaged via mobile phone the assaults on the hotels, train stations, and Jewish center that killed more than 170 people. In testimony [44kb PDF] today before the Senate Committee on Homeland Security and Governmental Affairs, New York Police Commissioner Ray Kelly (pictured) said he wanted to take out that "formidable capacity to adjust tactics while attacks are underway." ... For now, Kelly said, the NYPD is taking a whole range of measures to stop another Mumbai-style spree - from working with private businesses to interdicting boats to training recruits in heavy weapons to installing a spycam network across downtown Manhattan. But Charles Allen, the Department of Homeland Security's top intelligence official, confessed to the Senate panel that "response to a similar terrorist attack in a major U.S. urban city would be complicated and difficult." 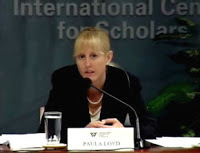 from danger room: For the third time in eight months, a social scientist with the Army's Human Terrain cultural research program has died. In early November, while on patrol in an Afghan village, Paula Loyd was doused with a flammable liquid, and set on fire. She suffered second- and third-degree burns over 60 percent of her body. Loyd was rushed to a nearby medical center, where she was treated by a burn specialist. Shortly thereafter, Loyd was evacuated to the military's Landstuhl Regional Medical Center in Germany, and then to Brooke Army Medical Center in San Antonio, Texas. But after a two month struggle, she was overcome by her injuries. This is the latest in a series of attacks on Human Terrain personnel. In May, Michael Bhatia, an Oxford-trained political scientist working in eastern Afghanistan, was killed, along with two soldiers, by a roadside explosive. Less than two months later, a bomb detonated inside the Sadr City District Council building in Iraq. Social scientist Nicole Suveges was inside. She and 11 others died instantly.

darpa chief staying on, for now

from danger room: Tony Tether, the controversial chief of the Pentagon's premiere research agency, Darpa, will remain in office during the Obama administration. At least, for a little while. "Dr. Tether will be here after Jan. 20, and there's no formal date on which he plans to leave," Darpa spokesman Jan Walker tells Michael Belfiore in an e-mail. Tether, the longest-serving director of the $3 billion-per-year agency, is one of several top Pentagon officials who will stay in place, if only temporarily, after the presidential transition. Defense Secretary Bob Gates is, of course, at the top of the list of holdovers.

army assembles 'mad scientist' conference
from danger room: Last August, the U.S. Army held a three-day conference in Portsmouth, Virginia, to look at new developments in military science and hardware. The confab was called the "2008 Mad Scientist Future Technology Seminar." Really. It was. "The objective of the seminar was to investigate proliferating technologies with the potential to empower individuals and groups in the next 10-25 years," according to an unclassified summary of the Mad Scientist gathering [1.3mb DOC], obtained by Danger Room. As you'd expect from such a colorfully-titled gathering, the collected brains predicted a world in which individuals would have easy access to everything from ray guns to nano-bots to bioengineered weapons to arms for creating international chaos online.

pentagon's far-out science podcast
from danger room: Stick this in your iPod and smoke it: The U.S. Department of Defense is launching a new radio show audio webcast, "Armed with Science: Research and Applications for the Modern Military." I listened in to the first broadcast - an interview about atomic timekeeping with Geoff Chester of the U.S. Naval Observatory's Master Clock - and it was actually pretty damn interesting. Chester discussed the history of timekeeping - from waterclocks and pendulum clocks to leap seconds - as well as the principles behind the atomic clock, which uses natural oscillation in specific atoms to define a timescale. Chester also talked about the application of timekeeping to military operations. “In our business, timing is literally everything,” Chester said. “An error of three nanoseconds in timing translates to a position error of one meter for a precision-guided weapon.”

virginia teen dies after being tased by police
from wsls: State Police are investigating the death of a 17-year-old after Martinsville Police used a stun device on a teenager Thursday night [jan8]... Justin Gregory, 15, says his friend, 17-year-old Derick, died after a Martinsville officer used a taser on him... Police say they were called there for a disorderly conduct after callers say someone was “using the bathroom” in the road. Gregory tells us Derick, “was out in the middle of the road acting stupid.” When the boys went inside, Gregory said only a few minutes went by before police arrived. Police say it was Officer R.L. Wray who responded. When he arrived, he noticed the front door had been forced open and requested assistance. Police say Wray heard loud banging noises coming from the kitchen, which according to Gregory is in the back of the home. When Gregory saw the officer coming, he claims, “I was upstairs, and the cops told me to come down. So I came downstairs, and everything happened,” said Gregory. Gregory says Derick had been drinking, but claims there was no confrontation with police. “Derick walked around from the kitchen, into the living room, and got half-way into the living room, and the cop tased him. He didn’t run at him or nothing,” said Gregory.

from raw story: In response to a recent rise in public surveillance funding by the Department of Homeland Security, ACLU's Technology and Liberty program has launched a Web site to let America know – YouAreBeingWatched.us. The Web site provides news related to public video surveillance, links for more information, ways to take action, a 'horror stories' tab detailing recent misuse of surveillance authority and a flash map of locations in the US where municipal surveillance cameras have been installed. “The new site will provide one-stop shopping for users, including the press, who want to know the big picture and the fine details about the spread of video surveillance systems,” said Caroline Fredrickson, director of the ACLU Washington Legislative Office, in a release... Meanwhile, a timely University of California study [8.9mb PDF] has found that San Francisco's $700,000 'Crime Camera' program has had no impact on violent crime since its 2005 installation. The study also states that robberies dropped significantly within each camera's radius, but notes that this finding is inconclusive.

from eyes on the lies: The astronomically corrupt federal agency that has brought us the terrible aftermath of hurricane Katrina has a new card in their sleeve: Propaganda! This federal agency – which two years ago admitted that in time of disaster the agency would openly recruit clergy men to encourage people to submit to the governments agenda – has fired up their own brand spankin’ new YouTube Channel. FEMA says that the goal with this new channel is, “to provide a forum for the public to see how FEMA operates in communities across America, comment on disaster response and recovery, and learn how to prepare homes and communities for all hazards.” Translation: to put up a fight against the hundreds of video’s on YouTube that effectively expose FEMA of being a corrupt agency that completely oversteps the bounds of the Constitution. Without any FEMA video’s on YouTube that paint a pretty picture in the minds of the viewer, FEMA has earned a well deserved bad rap. FEMA has a long road of public relations ahead of them. The top 5 hits when you YouTube “FEMA” all relate to the thousands of plastic coffins that are found along FEMA internment installations and a few videos of FEMA concentration camps. This is a big difference to the videos on FEMA’s channel that portray friendly people who work in the field and appear to be friendly everyday people who are kind and helping after a disaster. However, in a time of a national disaster like 9/11 where FEMA will be used to round up the people of political dissent, these friendly everyday people will be overshadowed by Homeland Security troops who are ordered to round up herds of people who are not drinking the government kool-aid.

norad exercise in dc area on jan14
from free republic: DC area residents should not be alarmed to see and hear military aircraft overhead today [jan14] as NORAD will be conducting a live-fly exercise. Civil Air Patrol aircraft, Air Force F-16s and Coast Guard HH-65 Dolphin helicopters will participate in the exercise which also includes the Federal Aviation Administration, the National Capital Region Command Center, the Joint Air Defense Operations Center and other agencies and military groups. The flights are expected to take place late at night and early in the morning. It is the latest in a series of exercises which have been conducted following the terrorist attacks on September 11th, 2001. In the event of inclement weather, the exercise will be postponed until Thursday.

rangel to reintroduce military draft measure
from the hill: Rep. Charles Rangel (D-N.Y.) likely will introduce his controversial legislation to reinstate the draft again this year, but he will wait until after the economic stimulus package is passed. Asked if he plans to introduce the legislation again in 2009, Rangel last week said, “Probably … yes. I don’t want to do anything this early to distract from the issue of the economic stimulus.” Rangel’s military draft bill did create a distraction for House Speaker Nancy Pelosi (D-Calif.) soon after Democrats won control of Congress after the 2006 election. In the wake of that historic victory, Pelosi said publicly that she did not support the draft and that the Democratic leadership would not back Rangel’s legislation. She also said Rangel’s legislation was not about reinstating the draft but was instead “a way to make a point” about social inequality.