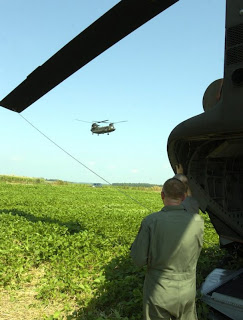 from chicago tribune: National Guardsmen from Iowa are trying to fix an Army helicopter that landed in a western Kentucky soybean field after problems arose with its hydraulic system. Chief Warrant Officer Nick Von Muenster of the Iowa National Guard told The Gleaner of Henderson that the Chinook was headed to Fort Campbell, where the crew of five were supposed to train. Iowa National Guard public affairs officer Maj. Mike Wunn said the crew decided to land Sunday afternoon so they didn't risk more problems with the helicopter. Another Chinook landed in the Henderson County field Monday with guardsmen and parts to fix the first helicopter. Land owner David Alexander said losing some of his soybeans is "worth the excitement."

defense event in valley points up readiness
from arizona republic: The arm of the U.S. government that's responsible for knocking off threats to the country gets together in Phoenix this week to talk about topics such as natural resources and sustainability. The Department of Defense holds a get-together every two years called Sustaining Military Readiness Conference. The Pentagon uses the sessions to try to forge partnerships with people, organizations and governments that neighbor military installations. The idea: Military readiness depends as much on its ability to train its troops and effectively run its bases as it does on the number of troops and the amount of hardware. The last conference was in Orlando. The latest one is in Phoenix. It kicks off today and runs through Friday at the Sheraton Phoenix Downtown Hotel.

idf to train with US & turkey militaries
from jpost: The Navy will conduct a joint drill with the US and Turkish navies next week, the IDF announced in a statement Tuesday. The drill will take place in the eastern Mediterranean and will be hosted by Turkey. In the exercise, dubbed Reliant Mermaid X, the three navies will rehearse naval rescue missions and work to improve their level of coordination. Reliant Mermaid X will include search and rescue simulations, quick response to naval emergencies, humanitarian aid in real time and evacuation of 'wounded' personnel from the waters. Eight ships, four helicopters and three search and rescue aircraft from the three countries will participate in the drill. The Israel Navy will be represented by the Lahav and Sufa warships as well as a navy helicopter.

service members train to respond to domestic emergencies
from sofmag: U.S. Army North’s Task Force 51 arrived at Fort Leavenworth, Kan., July 31 for Vibrant Response 2009. The exercise will focus primarily on responding to chemical, biological, radiological, nuclear and high-yield explosive incidents and is designed to confirm the readiness and abilities of incoming units that will fall under the CBRNE Consequence Management Response Force effective Oct. 1. The 167th Theater Support Command, an Alabama National Guard unit based out of Fort McClellan, Ala., welcomed Operational Command Post 1 upon its arrival with a series of informative inprocessing briefings... The civilian agencies will not be participating in the exercise. However, if a real-world catastrophe were to occur, Joint Task Force 51 would work with multiple civilian agencies, to include the Federal Emergency Management Agency. During Vibrant Response, U.S. Army North will play its part as the Army Service Component and Joint Force Land Component Command for U.S. Northern Command.

biometrics to ensure parents leave with the right kids 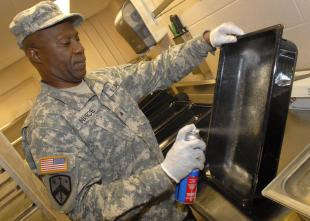 from dvidshub.net: Long days at the office with never ending meetings or long days outside with hard physical activities can leave a service member exhausted both physically and mentally, but three times a day you can relax and unwind as you refuel at the dining facility. Soldiers and civilians who work at Tice Hall in the battle command training center dining facility are doing their part in keeping service members well fed and hydrated during the 2009 Vibrant Response exercise at Fort Leavenworth, Kan., Aug. 1-9. "We are conducting 24-hour food operations to support this exercise," said Army Master Sgt. Robert Keppler, chief food service advisor, 35th Infantry Division. "We are here to provide the participants with quality, nutritious food."

vt & wv governors oppose dod emergency powers
from thehill: A bipartisan pair of governors is opposing a new Defense Department proposal to handle natural and terrorism-related disasters, contending that a murky chain of command could lead to more problems than solutions. Vermont Gov. Jim Douglas (R), chairman of the National Governors Association, and Vice Chairman Gov. Joe Manchin (D) of West Virginia penned a letter opposing the Pentagon proposal, which they said would hinder a state's effort to respond to a disaster. Current law gives governors control over National Guard forces in their own states as well as any Guard units and Defense Department personnel imported from other states. The letter comes as the Pentagon proposes a legislative fix that would give the secretary of Defense the authority to assist in response to domestic disasters and, consequently, control over units stationed in an affected state.

why is natl guard recruiting for 'internment' cops?

uk national id card cloned in 12 minutes
from computer weekly: The prospective national ID card was broken and cloned in 12 minutes, the Daily Mail revealed this morning. The newspaper hired computer expert Adam Laurie to test the security that protects the information embedded in the chip on the card. Using a Nokia mobile phone and a laptop computer, Laurie was able to copy the data on a card that is being issued to foreign nationals in minutes. He then created a cloned card, and with help from another technology expert, changed all the data on the new card. This included the physical details of the bearer, name, fingerprints and other information. He then rewrote data on the card, reversing the bearer's status from "not entitled to benefits" to "entitled to benefits". He then added fresh content that would be visible to any police officer or security official who scanned the card, saying, "I am a terrorist - shoot on sight." According to the paper, Home Office officials said the foreign nationals card uses the same technology as the UK citizens card that will be issued from 2012. Guy Herbert, general secretary of privacy lobby group NO2ID, said it was a mistake to assume that the Home Office cared about the card, or identity theft or citizens' benefit. He said the Home Office wanted the central database to record citizens' personal details in one place for official convenience. "It is that database which will deliver unprecedented power over our lives to Whitehall and make the Home Office king in Whitehall. The card is an excuse to build the database. If the card is cancelled it already intends to use passports as a secondary excuse," he said. Home Office officials said they were working on a response to the story, and would issue a statement later today.

all cars would carry gps to track miles under oregon bill*
flashback: oregon eyes taxing vehicles per mile by satellite*