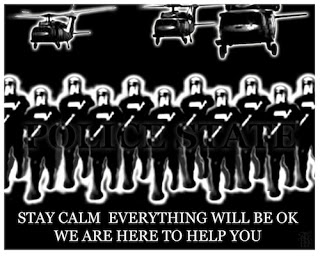 from kfoxtv: On Tuesday, the El Paso Police Department got approval to buy 1,145 M4s, otherwise known as an AR 15 semi-automatic rifle. "It's going to be used in rare instances, hopefully we won't have to use them at all in El Paso," said Chief Greg Allen. Allen said El Paso is behind places like Austin, Albuquerque and Dallas, where officers there already have the rifles. But El Paso is not like those cities. As KFOX has reported, El Paso is the second safest city in the country...

police cuff citizens for videotaping arrests
from the register: Since the police beating of motorist Rodney King in 1991, men in blue have looked warily at the civilian videotaping of arrests and other police activities. Some cops are so opposed to the practice, they've begun arresting the amateur videographers and charging them criminally. According to this article published by the New England Center for Investigative Reporting, police in Boston and Pennsylvania have regularly arrested otherwise law-abiding citizens who videotape cops as they go about performing arrests on public streets. The charge: illegal electronic surveillance. "The police apparently do not want witnesses to what they do in public," Sarah Wunsch, a staff attorney with the American Civil Liberties Union of Massachusetts, was quoted as saying.

video: man confronts poppy bush - gets same from secret service
from infowars: The video blogger who confronted international war criminal and top-drawer minion of the New World Order, George Bush Sr, was visited by the Secret Service after posting a video of the incident on YouTube.